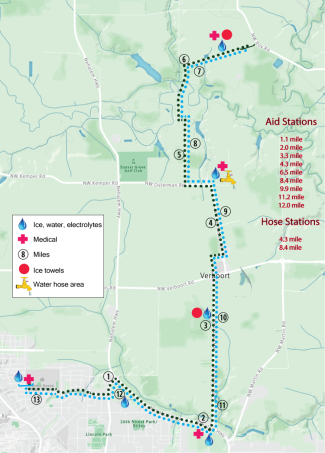 again for the opportunity to pace for an Uberthons race, this time for the Oregon Fall Half Marathon on September 12th. I had run the Oregon Fall Marathon last year, which was my first Uberthons race and had a great time. It was at Mt. Angel last year and I remember getting a PR. You can check out my recap HERE. This year the race took place in Forest Grove, OR and started at Forest Grove High School. It was an out and back course and was pretty flat. There were plenty of aid stations and even had hose areas as well as a misting tent towards the end, which was nice!

The race started at 7 am and my Garmin shows that it was 57F with 82% humidity. It was a great day for a race. I’m glad it started early because it warmed up more towards the end and I ran extra miles after I finished pacing (I had my 2nd 20 miler scheduled for marathon training that day). Below is a pic with fellow pacers Mariah, Sarah, and Barbara. We got there early enough to do a warm up lap.

Here’s a pic of the starting line. (Also, it was the finish line as you can see in the pic.) 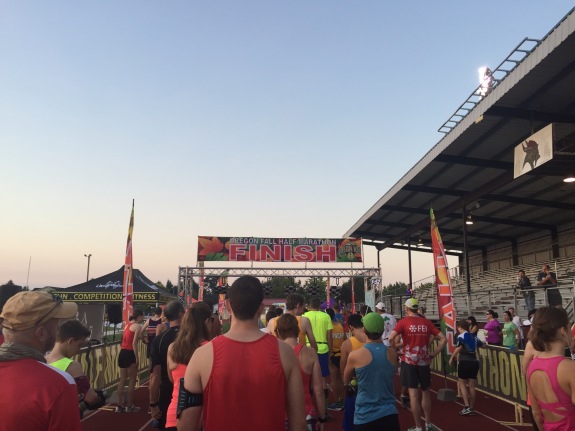 Pre race pic of the 2:10 pacers. I’m with Sarah and Melanie. 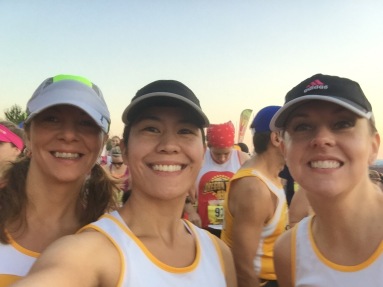 Here’s a pre race group pic of the pacer team. I’m so happy to be a part of this awesome team! 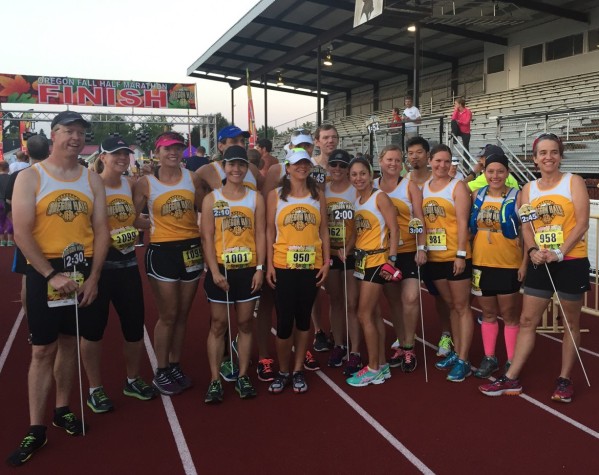 Below are pics I took during the race:

Started off on the track.

Team RWB was there just like at the last Uberthons half marathon. Team Red, White and Blue help enrich the lives of America’s veterans by connecting them to their community through physical and social activity. They are the ones with the flags. 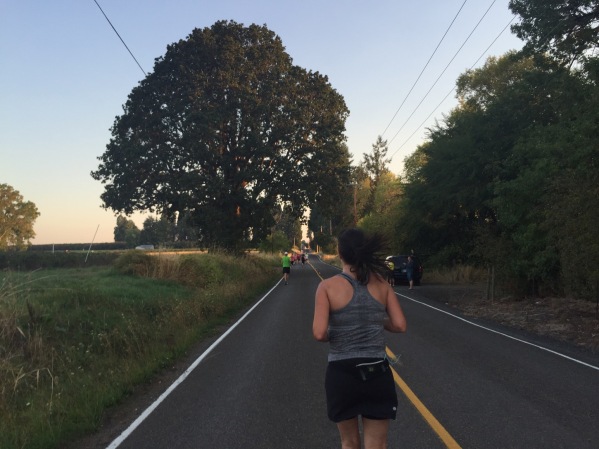 We went through farm country. 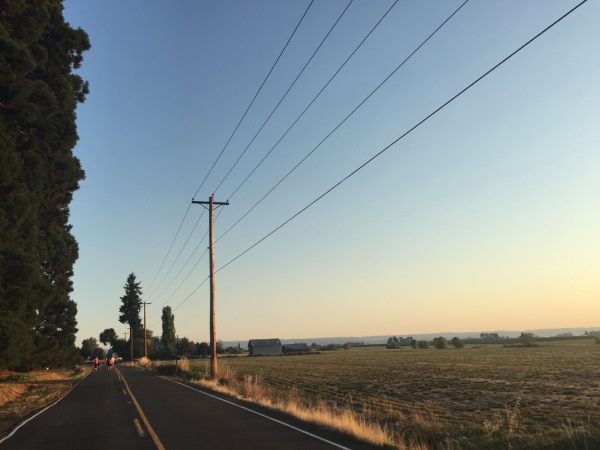 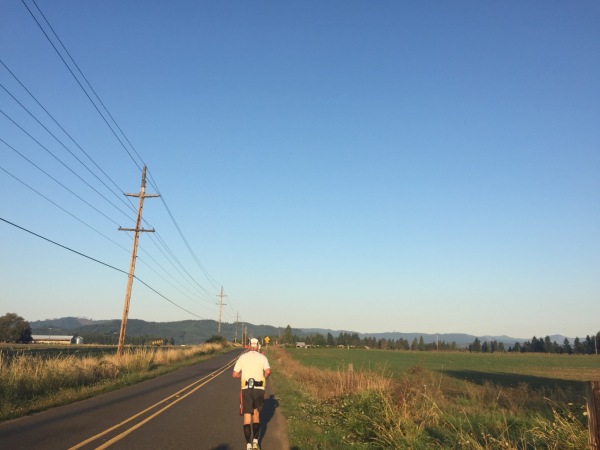 Mid run Selfie with the group. 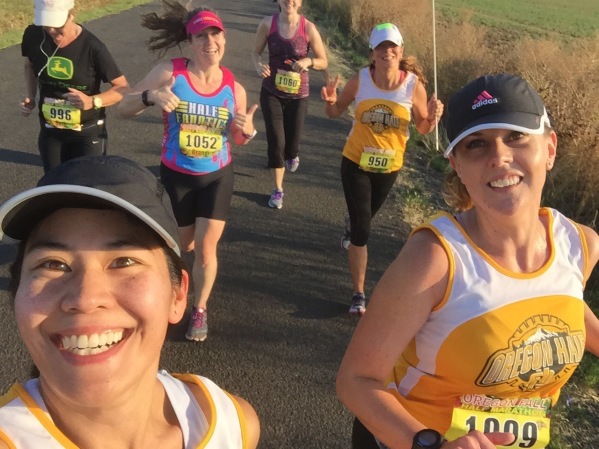 My official time was 2:10:22. I was over by 22 seconds but we were told that they would rather see us supporting someone then running a perfect pace, except for the person with the stick. It felt a lot better running someone in! We ended up helping four people get PR’s. It was awesome!! I’m so thankful to get this experience.

There was a good breakfast bar at the end which included eggs, bacon, and pancakes. Water and other drinks were available. I forgot to take a pic after I ran my extra miles.

Here’s the swag we got: 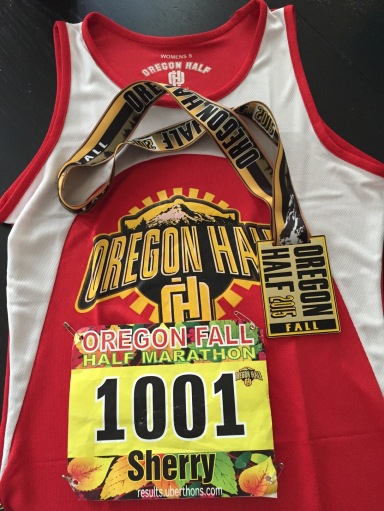 For those that did all three races: Spring, Summer and Fall, they got the gold medal for the series. Love how all the medals were engraved with our names for all the races and the series medal! They also invited gold medal recipients to an end of the year dinner celebration, along with the pacers, ambassadors and overall winners in the races. Pretty cool! 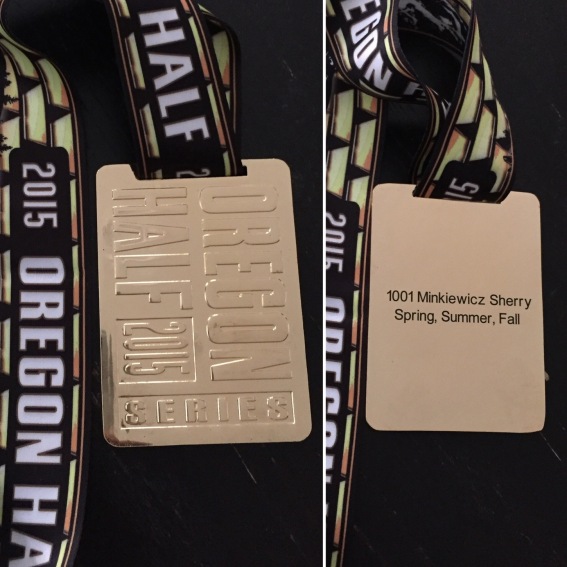 Who’s in for the 2016 Oregon Half Series? There’s a new half marathon in January for the Winter so now there’s four Oregon Half events. For more info, check out there page HERE.