This was my first time running the Oregon Summer Half Marathon organized by Uberthons at this location, so I was excited to get the opportunity to pace the 2:15 group. The race began 34 miles west of Portland at Stub Stewart State Park in Buxton, OR and finished at Gazebo Park in Banks, OR. I had run the Vernonia Marathon last April that runs on the same trail so I somewhat knew what to expect with the good downhill portion. It was a little different but it was nice to run on the same trail again.

I carpooled with my friend Angie and we got to Banks High School around 6:15 am. We saw the busses lined up, received our pacing sticks, and didn't have to wait long to hop on a bus to Stub Stewart State Park. Once we arrived, there was the usual long lines to the bathrooms. We were told there were Porta Potties that were further down so we headed down there but the line was long too. At least the line went pretty fast. I took my fuel for the race, UCAN, around 7 am. There was bag check and it was fast and easy to check in. The park is nice and we had a fantastic view at the start. Here's a pre race pic with Angie.

The half marathon was scheduled to start at 7:30 am. Here's a group pic with all the awesome half pacers.

I was pacing with Stephanie again and our plan was to run the first six miles faster since it had the good downhill portion. We were going by effort level since it's easier to go downhill and then the rest would be slower.

Once we were off, a gal mentioned my bottle and said she had the same one. Always cool when I see someone using the Simple Hydration Bottle.  It's my favorite bottle to hydrate with and is usually filled with Nuun during a race.

It starts with a good downhill and the course is mostly downhill for the first six miles, so this course makes for a good half PR.

Running on the Banks Vernonia Trail is nice. It isn't the widest path and may be hard for people to pass but it is a small race so I thought it was fine.

Love this part with all the trees along the path.

There's also lots of bridges along the route.

It was great to be shaded by the trees on the trail but it did open up half way so I got hot quick.

I noticed they handed out ice towels at one aid station but I missed the other one. According to the website's map they had ice towels at 9.9 miles and 11.4 miles. So nice to have on a warm day. 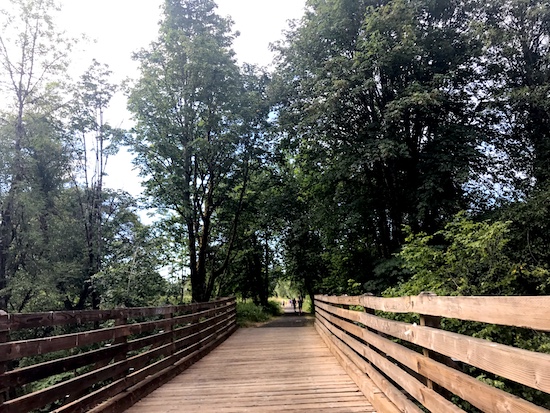 We finished at Gazebo Park. Official time was 2:14:14. I think the pacing went pretty good. With the downhill, it was the plan to go faster in the beginning and I think we executed it well. It's always great to get the opportunity pace and it was another fun experience. 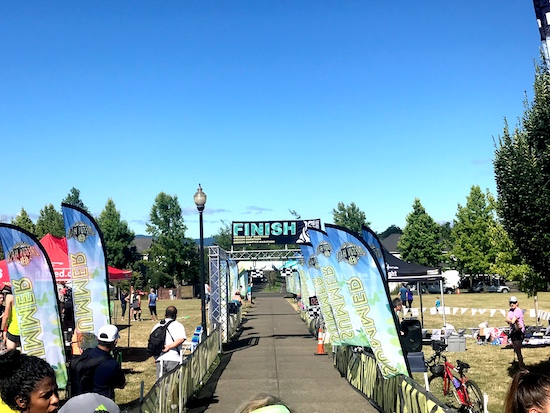 After I got my huge medal and water I got in line for the food.

They had hamburgers, chicken and veggie burgers, potato salad and fruit. Here's my burger and fruit plate. So good after running. 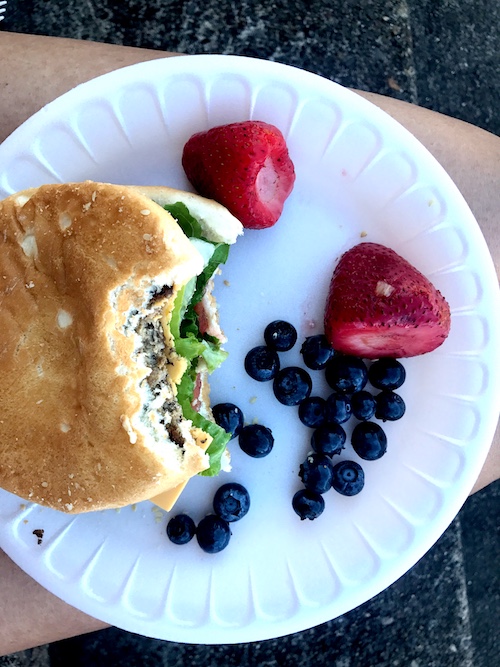 They also had ice cream. The Cookies and Cream was melting and they had to refreeze so I had to resort to the Strawberry flavor which was delicious that hot day.

Pic by the finish line. 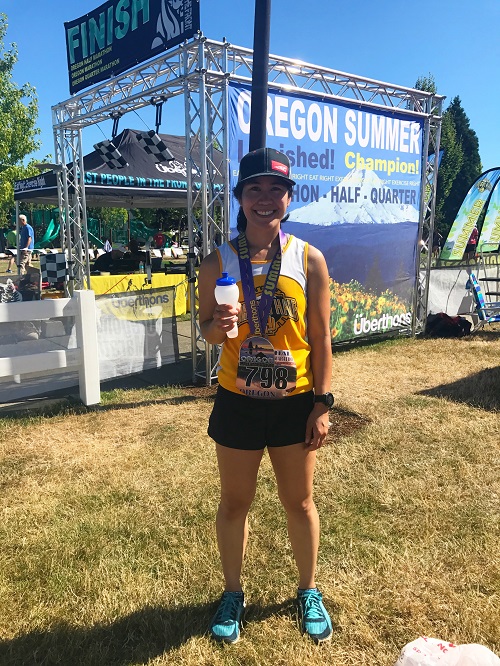 It's nice how they have these magazine type backgrounds. Here's a pic with Angie who did awesome pacing the 1:45 group.

It was another great pacing experience. I don't have any races scheduled yet until CIM in December but I might pace the Oregon Fall Half Marathon, September 9. Until then, happy running.