This was my second time running the Seattle Rock’n’Roll Half Marathon and it was another great experience. The race was scheduled to start at 7 am so my morning started really early, around 4 am. I left my parent’s place around 5 am since I wanted to find free parking. I also like getting to races early enough to not feel rushed. I got my free parking which was a great spot on 4th Avenue near Valley, making it a close walk to the Seattle Center. It was a good thing I parked close because I had to go back and get my headphones that I forgot in the car when I realized at bag check. Music is a must for me especially when running long. It was also a good thing I got there early since it gave me enough time to walk back to get my headphones. This year they changed the start and we started on 4th Avenue and were closer to the Space Needle. Here’s the course map:

I met up with Ty from G+, for the first time, before the race.

Below are pics of everyone waiting at the start line. I think there were 40 corrals total. All racers running the half marathon, full marathon, or 8k lined up in the same corrals depending on their predicted finish times. There were lots of people!

For the first time ever, the Space Needle was transformed into the world’s largest starter pistol and fired off a round of thunderous comets to mark the start of the race. It was a cool change! 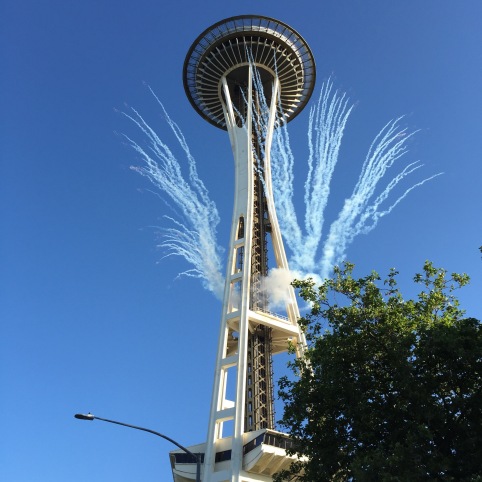 Here’s a pic where you can see the start line.

Here are pics I took during the race: 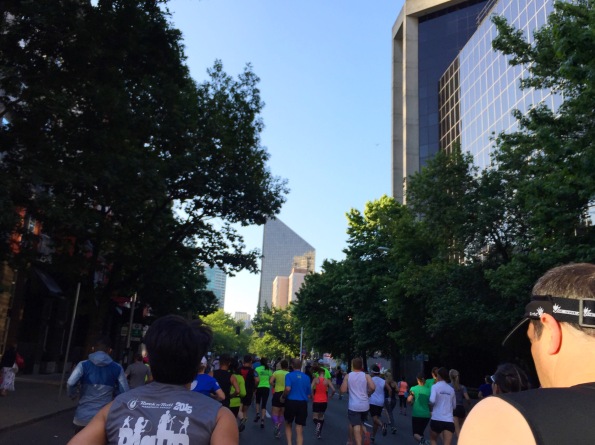 For most of the race I tried to stick with the 1:50 pacers, or at least have them in my sight. You can see the sign on the left.

The Brooks Rocker inflatable. He’s in the same spot as last year. 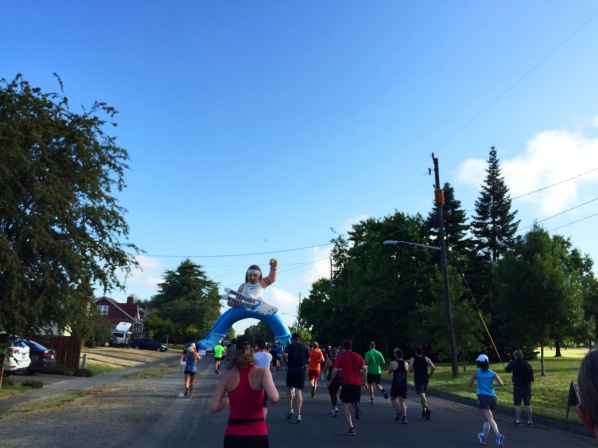 Here’s a spot letting us know the split point for the half and full marathons was coming up.

It was nice to run along Lake Washington. This was a tribute area with red signs. I’m not sure what cause it was for.

The next signs were blue. This was the sea of blue military tributes and American flags to remember the honor and sacrifice of our service men and women.

There was a Run Happy sign in the water.

Running on the freeway.

Safeco Field and CenturyLink Stadium in the distance.

On the Alaskan Way Viaduct where you can see the Great Wheel. 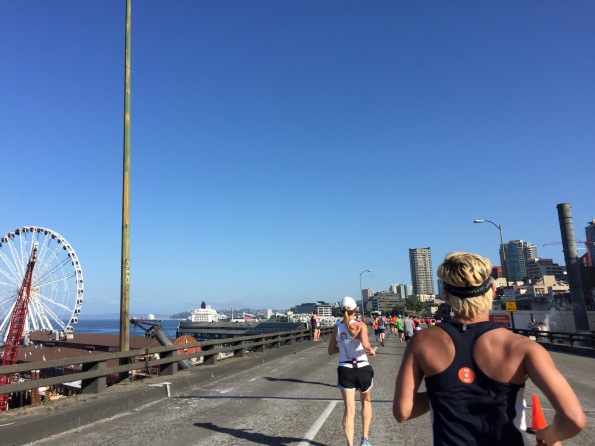 Happy to be finished.

I saw Ty again at the finish.

I then met up with Twitter friends for the first time. Here I am with the famous @blonderunner322. 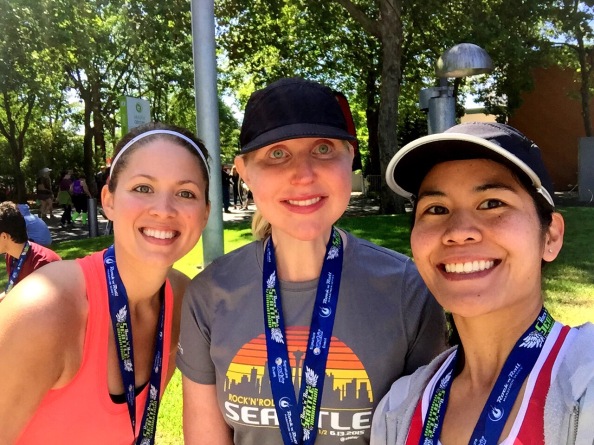 The next two pics were taken by @blonderunner322 with @exhalebill and @SueMcAllister in the last pic.

It was so awesome to meet everyone!! That was my first tweet up.

I felt I had an awesome race! It was a great day to run a half marathon. The weather was nice with the sun being out. It was warm but there was a cool breeze that felt good. My Garmin says it was 55 degrees out. The support, cheers, and bands along the way were super. There were plenty of water/gatorade stations for those that needed them. I still love using my Simple Hydration Bottle. The hill at the end was the worst but I’m happy with my time. I beat my time from last year and was 13 sec away from my half marathon PR! Here are my stats:

Here are my Garmin Splits:

It was another great Rock’n’Roll race and it was so cool to meetup with other awesome runners! Despite the hills, it’s a great scenic route of Seattle.

Do you have a race coming up? Have you ran a Rock’n’Roll race? Have you ever done a tweet up?