Wow! What a race! Running through the streets of Chicago along with 40,000+ runners was amazing! This was my second marathon and I’m happy to have finished with my ultimate goal to get sub 4. 🙂 I was hoping for something a little better but I can’t complain since I PR’d from my first marathon by 27 minutes.

I woke up around 5 am and drank some water and had my breakfast. I had a bagel with peanut butter and a Mamma Chia Strawberry Lemonade drink. My sister and I stayed at the Sheraton Grand Hotel which was about 0.6 miles away from the start. We were both in Corral F and scheduled to start at 8 am. I think it was a little after 6 am when we started walking to the start area. It was pretty easy to find with all the other runners heading in the same direction. This is the biggest race I’ve ever done and I’m happy both my sister and I got in this race being a lottery and all!

There were three different gates to enter through and we went through gate 2. Going through security was relatively fast. They were looking for our bibs and checked our bags. We didn’t go through metal detectors or anything. I had to ask where bag check was and was told it was near Buckingham fountain. So we headed there and bag check was quick, with no line in my bib number area. Then we headed towards our corral and stopped to get in line at the Porta Potties. There were Porta Potties on both sides of the corrals and of course the lines were long considering how many people were there but it wasn’t too bad. At about 30 minutes before the race I made my drink of BeetBoost and we did some leg swings. Then we went to our corral. My sister and I were wearing surgical scrubs to keep us warm, which my sis had got from her running friend. Thanks @thespeedysurgeon! Here’s a pic of us in our corral with them on.

Here’s a pic looking towards the start line. 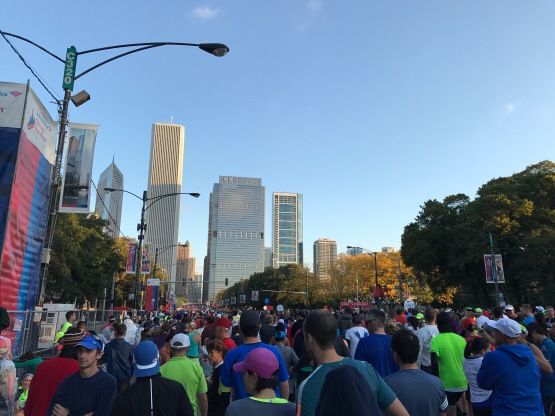 Pic looking behind us…so many people.

It was a great day for a race. According to my Garmin the temp was 52 deg F at the start. We were in the second wave and we had to wait about 10 min after the first wave left. I was a little nervous but excited. At around 8am, we were off. 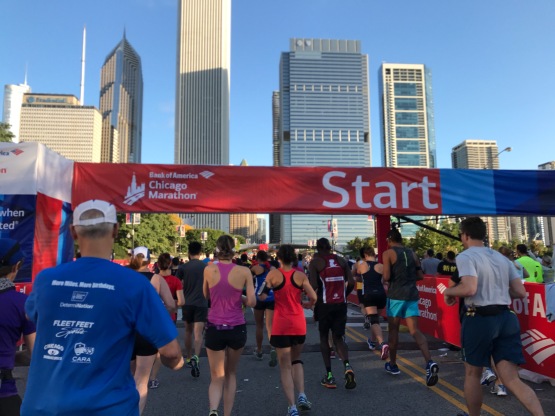 So I felt better prepared for this race with the help of my awesome running coach, Dawn. I’m so grateful she gave me the opportunity to be coached for free. She had great advice on how to fuel and hydrate for the race. She even sent me a bigger bottle which was so nice of her since the bottle I had held less liquid. The only thing was that I wasn’t used to the bigger bottle and having a hand held. But I tried it out on the shakeout run like I use my other bottle behind my back. It seemed to work fine so I decided to go with it. Bad idea though because within the first mile, the bottle fell and so I had to hold the bottle. Oh wells. It took a little getting used to but that didn’t hold me back. 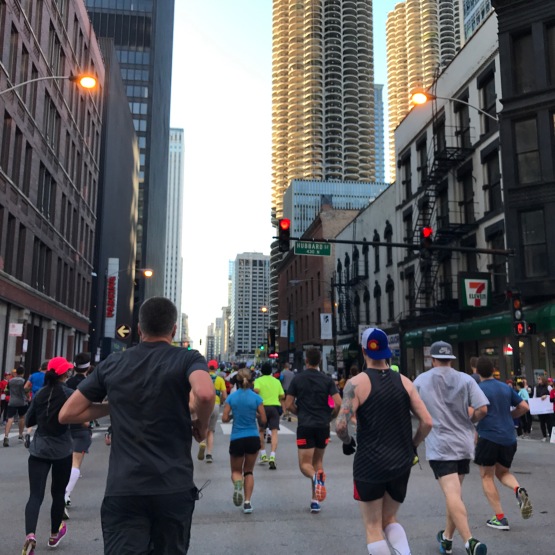 I managed to take a few pics. There is a blue line that I read was the line to follow as the shortest route. So I followed it as best as I could and tried to run the tangents. 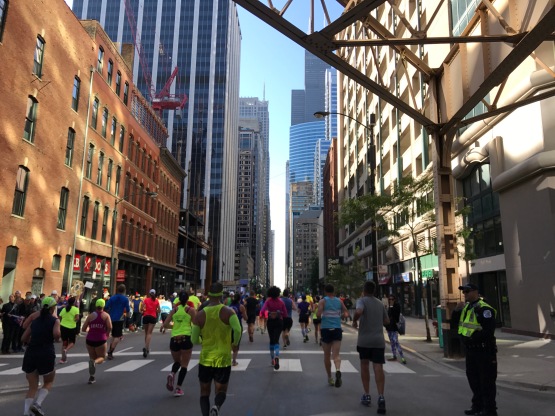 The crowds were fantastic! I saw so many signs, lots of power up ones, tap the mushroom from Mario Bros. for power haha and Christopher Walken ones. The volunteers at the aid stations were great too! Whenever I had to mix a bottle of nuun with plus they were eager to help pour water in my bottle. I felt pretty good up until after mile 20. That’s when my calves started to cramp. I was afraid they’d really ball up but thankfully they didn’t. Then my right quad tensed/cramped. Whatever it was, I had never experienced before but it hurt like heck. I just prayed it would go away and pushed on. It took a while but the intense pain diminished. Those last miles are a blur now. But the little hill at the end was a killer and felt like a mountain. 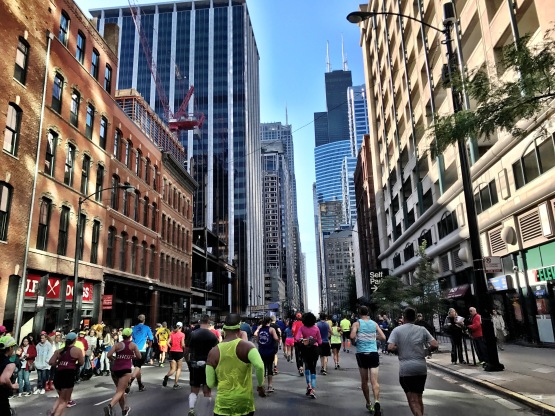 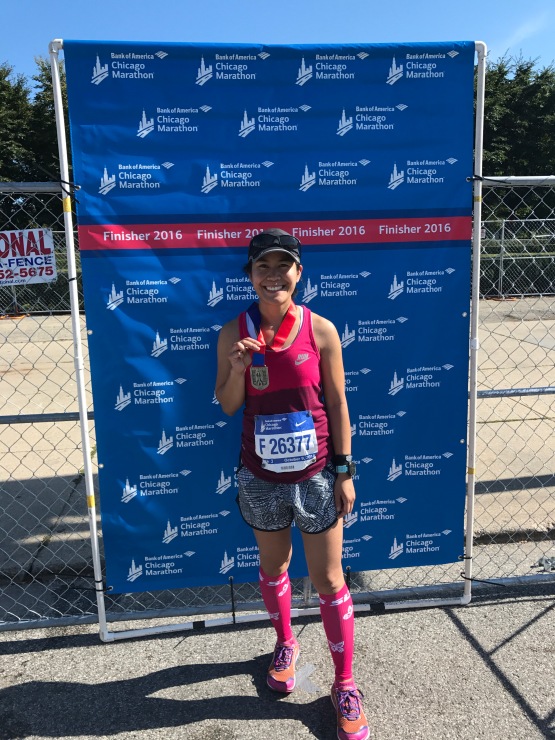 So weird, but right before the picture above, I got stung by a bee on my finger. I can’t remember the last time I’ve been stung by a bee, but there were a lot of bees out that day. The usual water and bananas were handed out. I grabbed a banana and ate it and I also had a chocolate protein drink. They also handed out a bag with other goodies in it like pretzels and popcorn.

My sister finished just after me and here’s a pic by Buckingham fountain that was by bag check.

Below was the entrance to the post race party and runner reunite area. 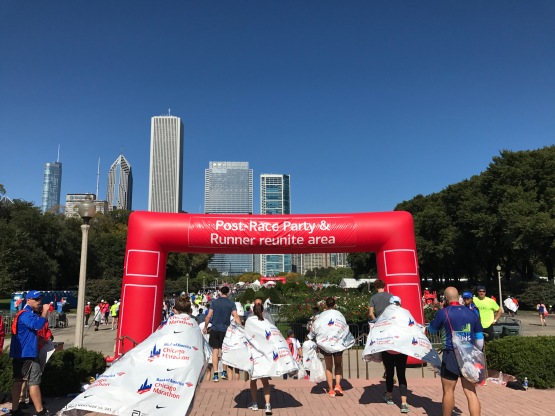 I’m not sure who the band was but there was post race entertainment. 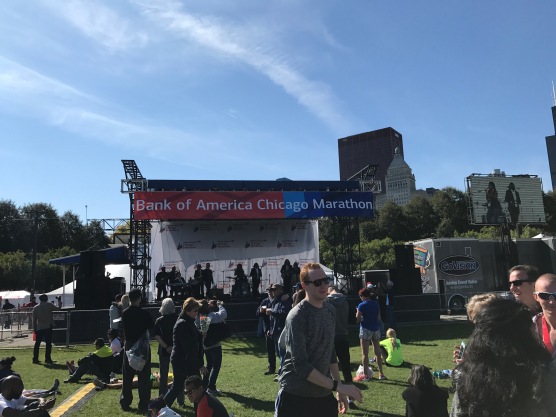 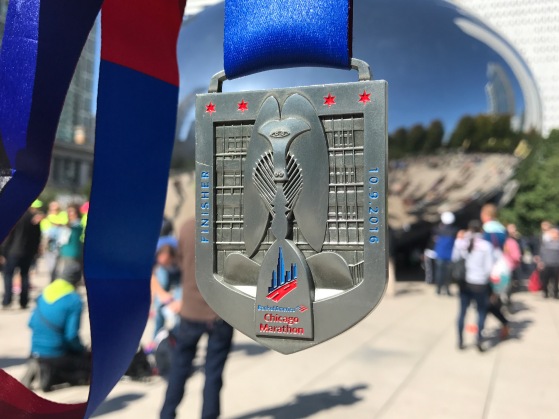 Jumping by the bean.

Despite the cramping etc., this race was an awesome experience! I’m so grateful to have been able to run in Chicago! Also, I gotta give thanks to Coach Dawn for helping me get the sub 4!! All the training and speed work helped so much, thanks! 🙂

But I just found out I have bronchitis with all the coughing I’ve been experiencing. I’ll be taking it easy until the cough goes away. Hope you have a great weekend!