This was the first time I ran the Hippie Chick Half Marathon. I like how this one is so close to me and less than 15 minutes away. It starts by the Ron Tonkin Field in Hillsboro, OR and is advertised as an all women’s event that is designed to celebrate women. It is held on Mother’s Day weekend for that reason. I thought it was a great turnout for a local race. At the start, they mentioned there were a total of 2300 people running either the Half or Quarter Marathon.

The race began at 8 am and it was already hot out. According to my Garmin it was 64 deg F. That is hot for me and by the end of my race it was close to 80 degrees. So hot! But before the race I had my usual Mamma Chia Squeeze and also a bagel which I took shortly after I got up around 6 am. I think it was around 7:30 am when I took BeetBoost right before I left the car. I had Gu and Nuun in my Simple Hydration Bottle to help give me energy and hydrate along the way.

I lined up close to the start. Here’s a pic of the start line.

Here’s a pic looking back at all the runners ready to run. 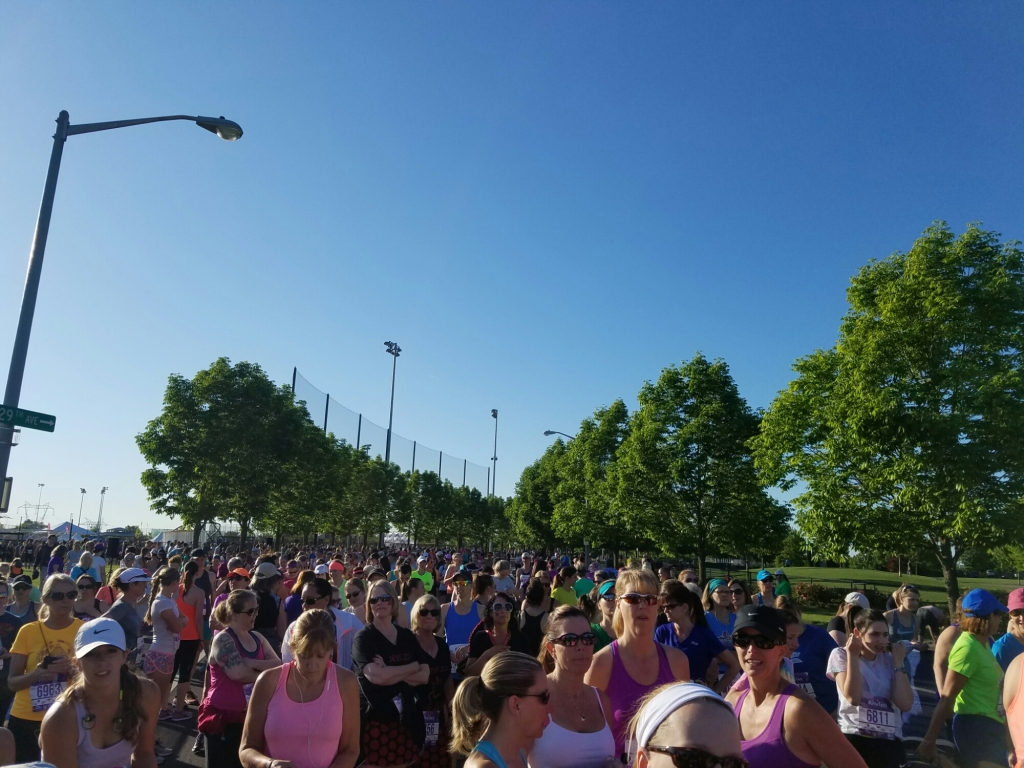 The National Anthem was sung and then we were off. There weren’t any waves or corrals so it was good that I was close to the start but I still had to weave and run past some runners. Here are the pics I took along the course:

I felt pretty good despite it being so warm, too good that I ran my first mile way too fast. My first mile was in 7:59. I really need to work on always starting off slow. I was good with that on my last half and got my PR. There was a good elevation drop in the first part too.

Here’s where we were getting close to Highway 26. 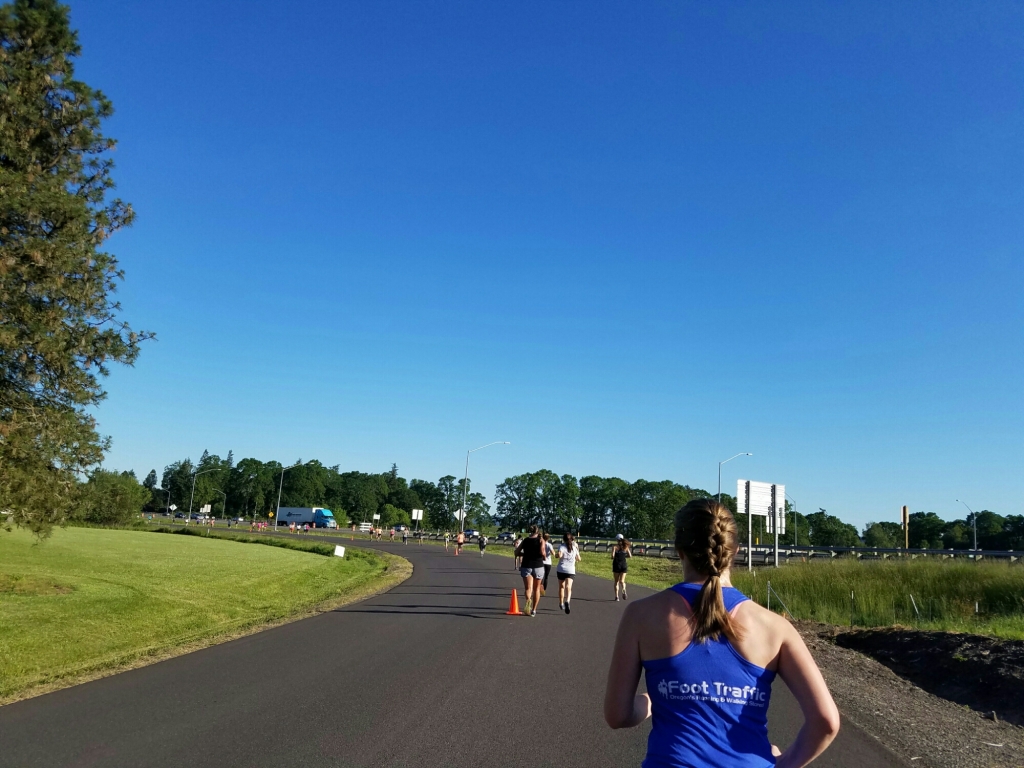 It’s a nice course with lots of countryside and farm views. 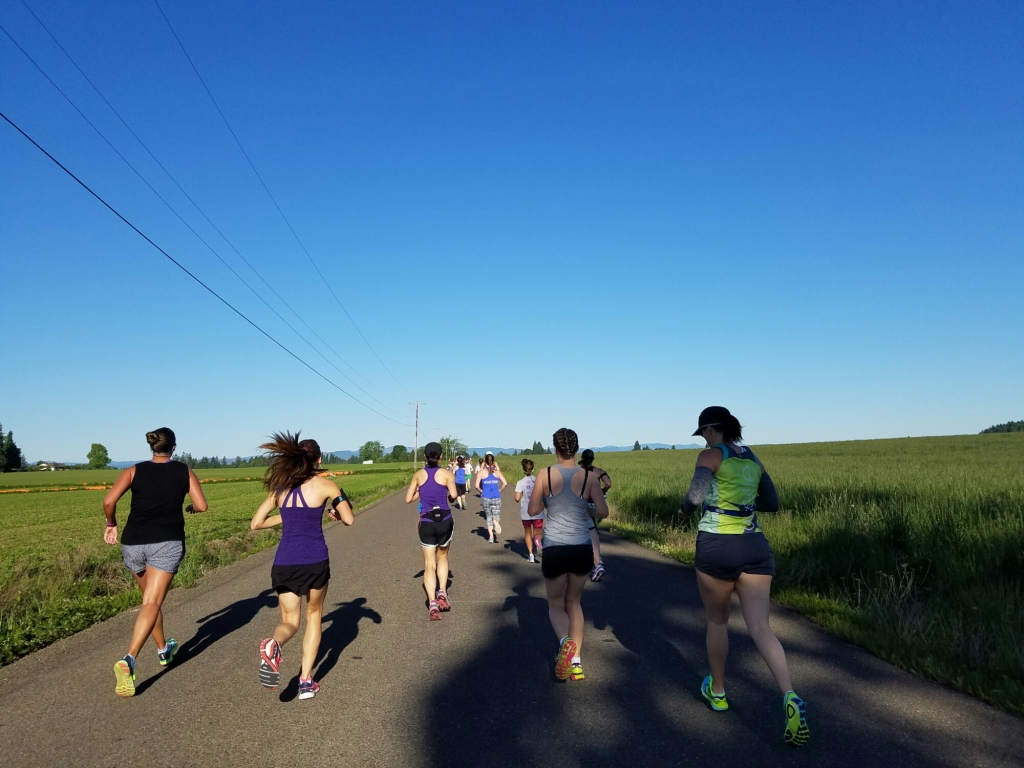 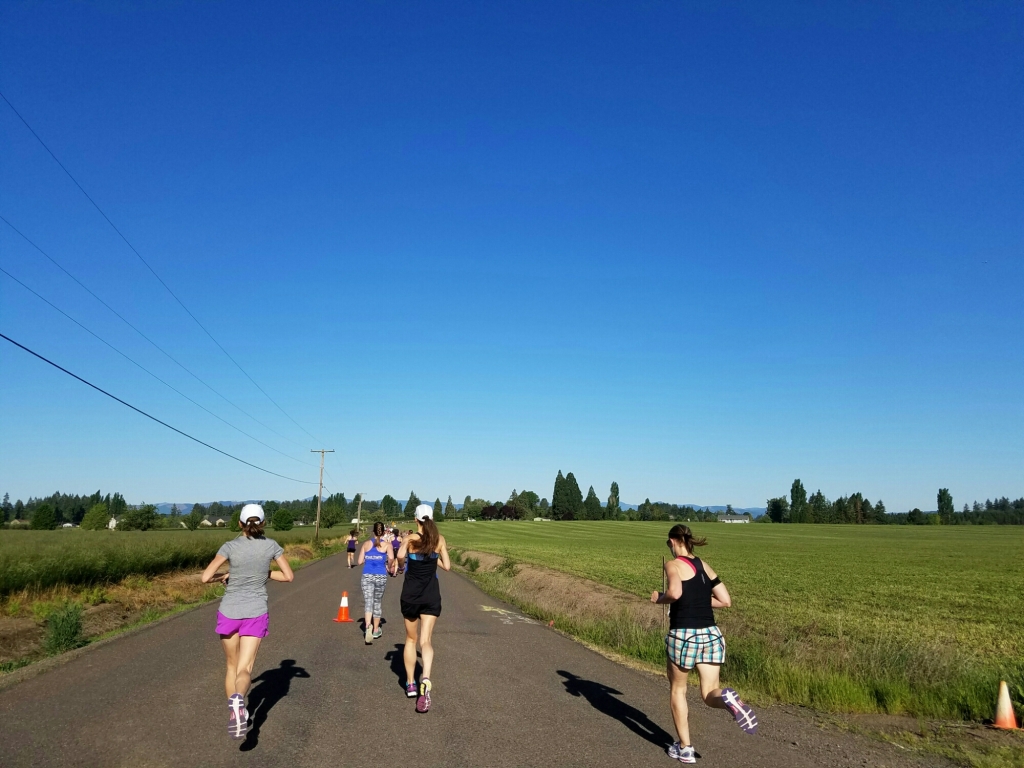 We ran close to the Hillsboro Airport by mile 4.

The shady parts were welcoming to cool off a little. The heat was getting to me.

After mile 10, my energy wasn’t the same. I was struggling with the heat. I think it was the combination of starting off too fast and the heat, caused my pace to  slow. I saw people walking and a part of me wanted to walk too. I knew it was a mental thing so I tried focusing on just the few miles I had left. I really felt like walking. The music I was listening to helped. Getting close to the finish with maybe a mile left, I heard someone cheering me on and it was my friend Angie, fellow pacer and MRTT(Moms Run This Town) member. It was cool to see her and she encouraged me to keep going strong to get that PR. I was pretty much dying at that point in my eyes and I knew I wasn’t going to get that PR but it really helped to get that encouragement. Thanks Angie! I was happy to finish without stopping. Here’s a pic with the cool necklace that we got at the finish.

At the finish, I saw Mariah, leader of our MRTT group. She did awesome in the heat and finished in 1:45ish!

A pic of the kiddos and I on the field.

I had to stay under the water spray thing for a while to cool off. Felt good! 🙂

This sample of berry bowl was so refreshing since it was nice and cold. 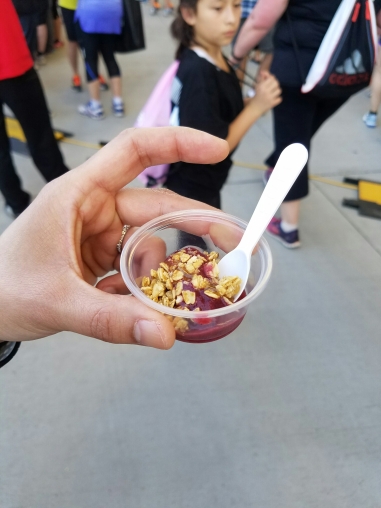 Here’s a close up of the cute necklace:

Here I am with my free Mimosa.

Below is a pic of Ron Tonkin Field. You can see the arch on the left which was the finish line. You could also see finishers on the Jumbotron.

Overall, I thought this was a great race despite the hot weather. The course was nice and relatively flat. There were some elevation gain but no big hills. I need to work on not starting out too fast. I ended up getting 15th in my division and 58th overall. I’m happy with that for it being so hot and all. I’d do this race again and it’s a nice Mother’s Day weekend race. We had to leave early so I didn’t enjoy the pancake breakfast they provided.

But I’ll end this with a pic with my awesome support. 🙂