I was grateful for the opportunity to pace again for an Uberthons race, this time for the Oregon Summer Half Marathon on July 18th. The race took place in St. Paul, OR and started at Heirloom Roses, a beautiful rose garden and farm.

I woke up around 5:30 am to get ready and then headed to a local coffee place to meet my fellow pacers from my local Mom’s Run This Town group, at 6:30 am. It took about 45 minutes to get to Heirloom Roses. We stopped at a gas station beforehand and I should have went to the bathroom then since by the time we got to the event, the lines for the porta potties were pretty long. A few more porta potties would’ve been nice since a few of us missed the pre race group pacer pic.

The race started at 8 am and it was already warm out. According to my Garmin Data, it was 68*F with 49% humidity. By the end of the race it was in the 90’s. It was so hot! I was not used to running in such hot weather since I’ve been running around 5:30 am.

Here’s a pic of the starting line.

Here’s a pre-race photo of the 2:15 pacer group. We had an extra person this time since there was the possibility that one of us couldn’t make it.

The course was pretty flat as we ran through farm country. There was just one big hill that we went up and then back down when we returned back. Here are some pics from the course: 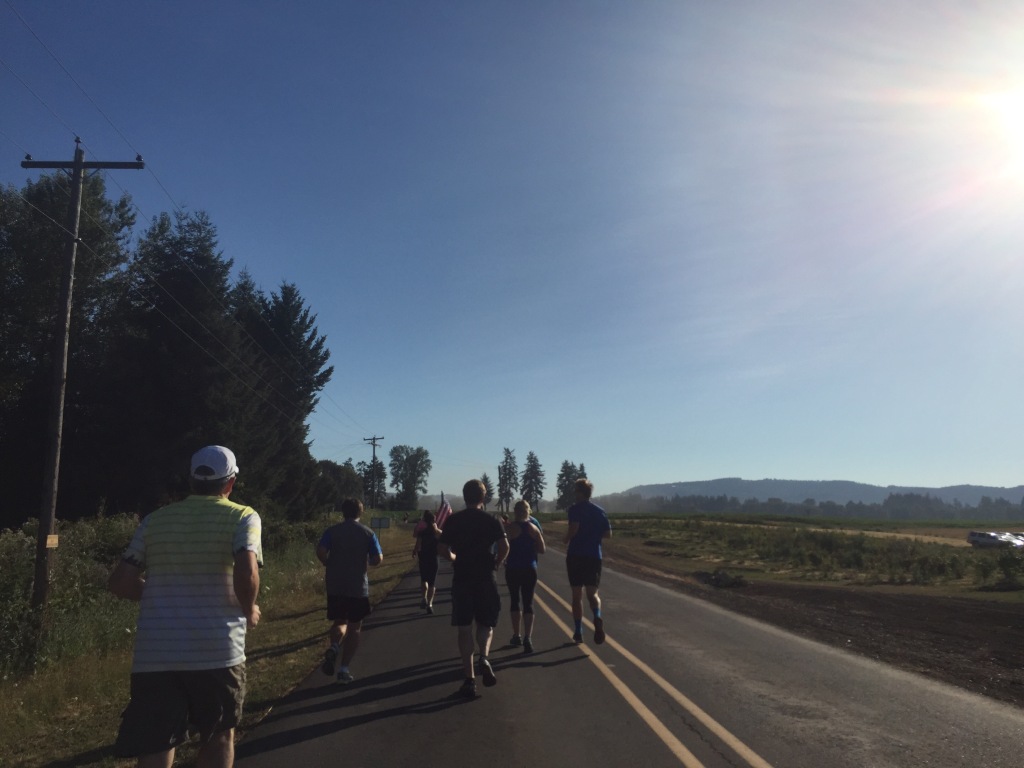 Team RWB was there.  Team Red, White and Blue help enrich the lives of America’s veterans by connecting them to their community through physical and social activity. They are the ones with the US flags in the pic below. 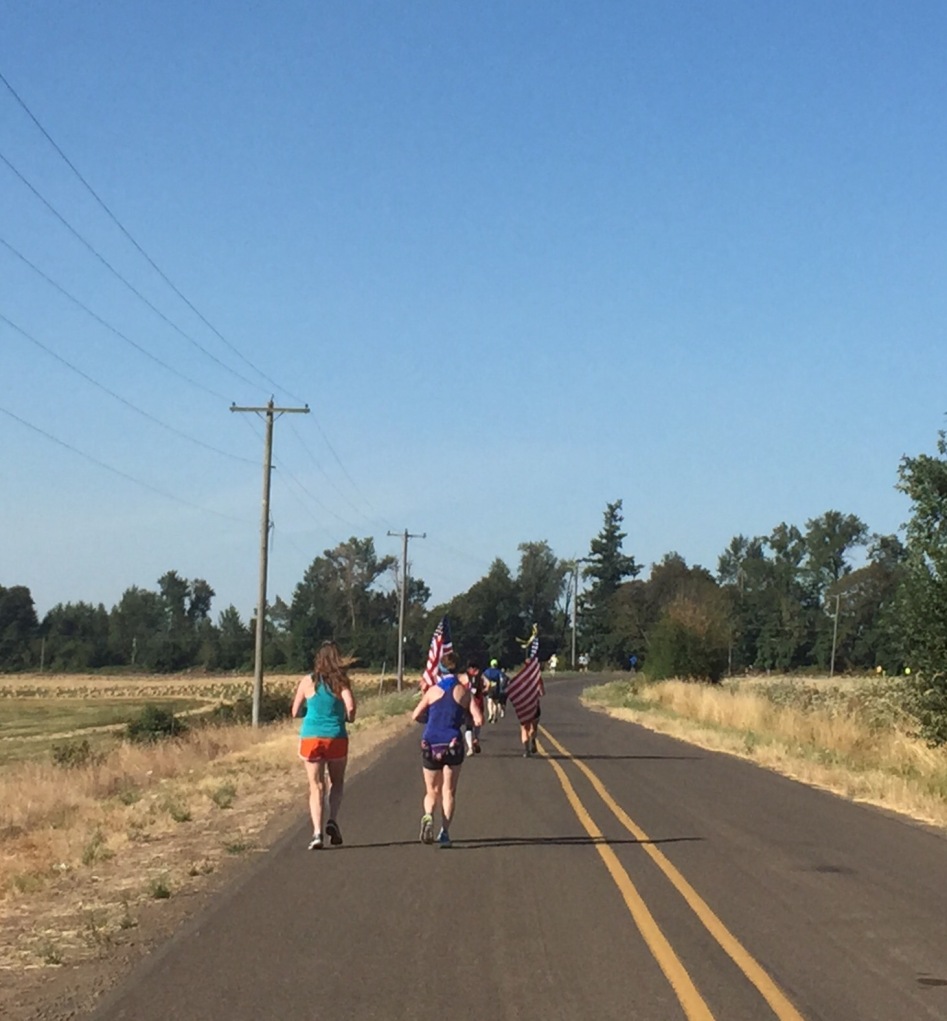 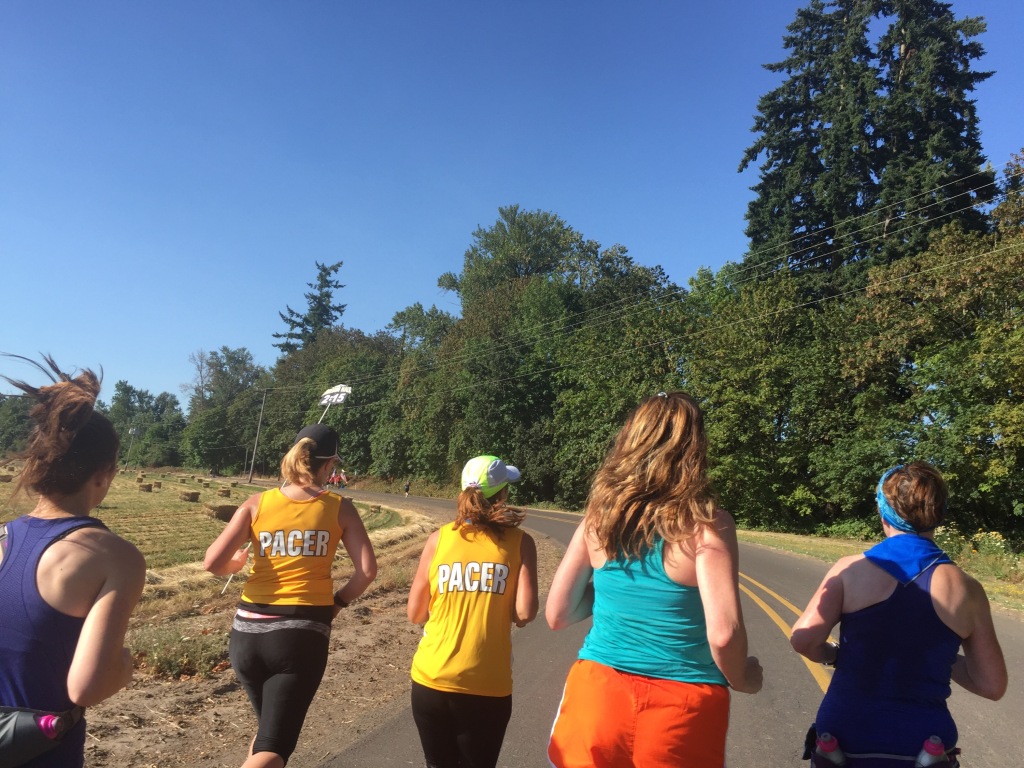 I witnessed history as this 6 year old broke the world record for his age group. He ran the half marathon in 02:13:13!

We ran on a little grass for this portion of the race.

Going down the hill.

Here’s what we went through right before the finish line. Photo courtesy of Uberthons.

I gotta say it was tough running in the heat, especially in the last few miles. Even though I was running slower than usual it just made it harder since I was out longer in the heat. I’m so glad I had my Simple Hydration water bottle with me to keep me hydrated. Some of the aid stations didn’t have water in cups fast enough when the next wave of runners went through. After six miles, we passed a guy who had collapsed (he was being helped already) and was later taken by ambulance for medical care due to heat exhaustion. Changes have already been made for next year’s Summer race. It will be at a different location that’s on a shaded trail. They’ve also made changes to an earlier start time so it’s cooler. Kudos to Uberthons for making changes like that.

We ended up coming in a little early to the finish. My official time was 2:13:59. My Garmin had me running only 13.05 miles. Not sure what happened there, but the finish line came sooner than expected. It was another great pacing experience even if it was in the heat. 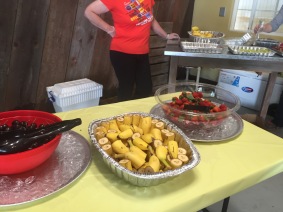 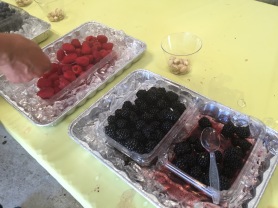 I looked forward to the watermelon. 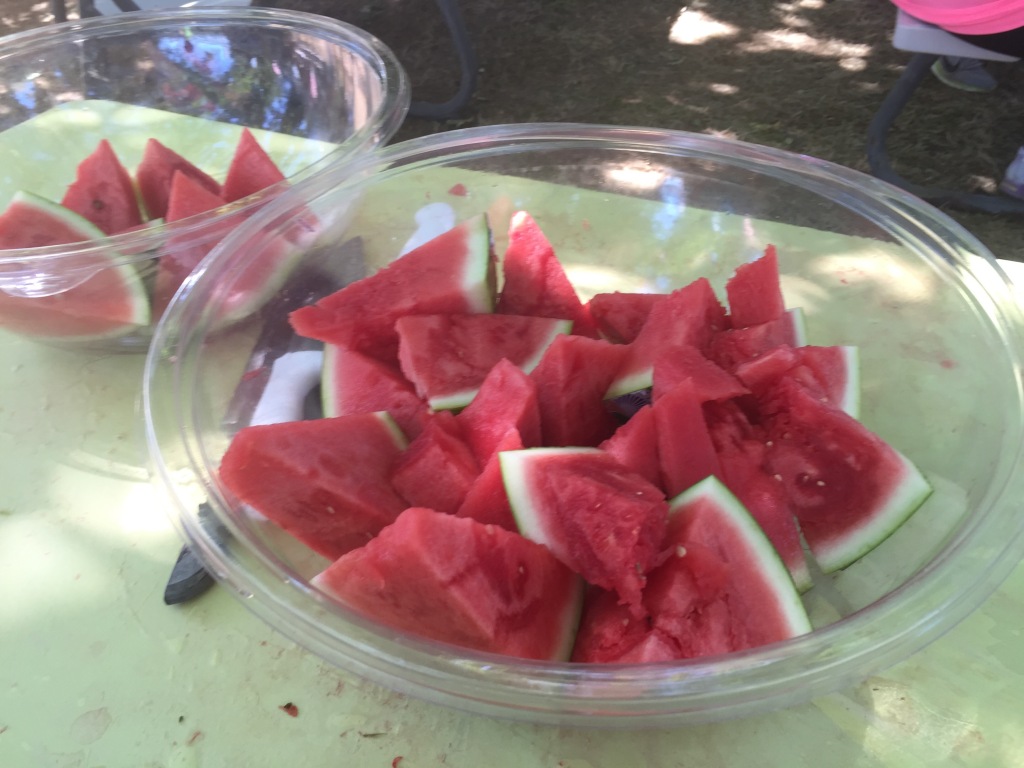 So good after a hot race! 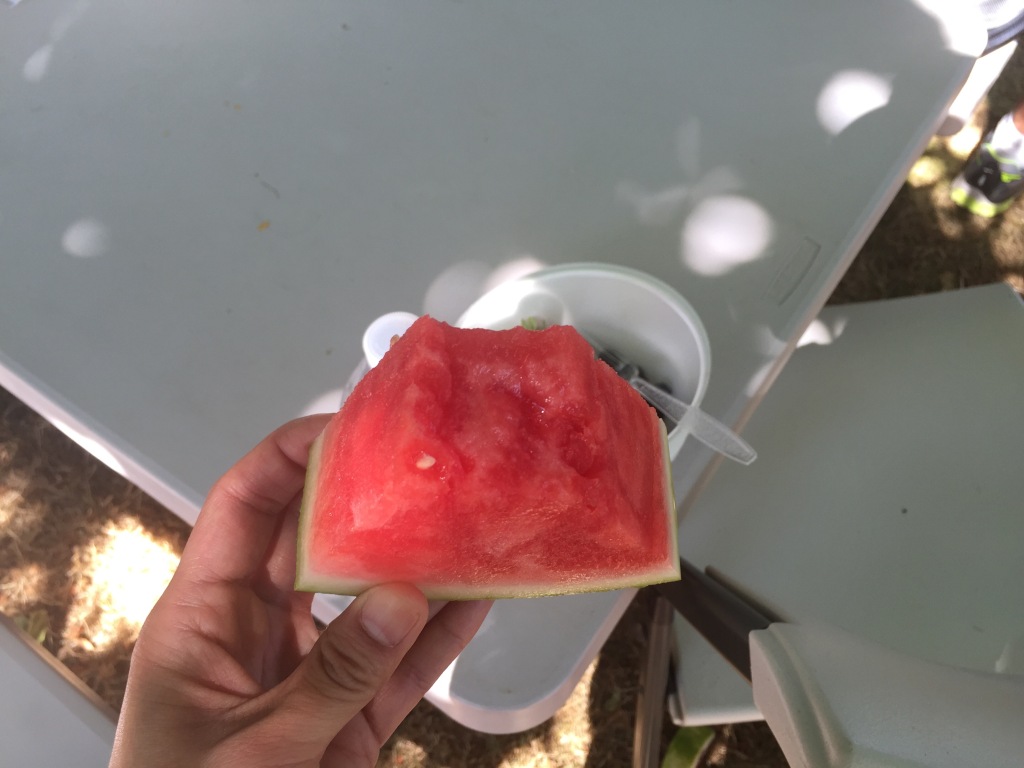 They also had free ice cream and ice cream bars, which was also nice on such a hot day!

Here’s the awesome medal. My name is also engraved on the back like last time. 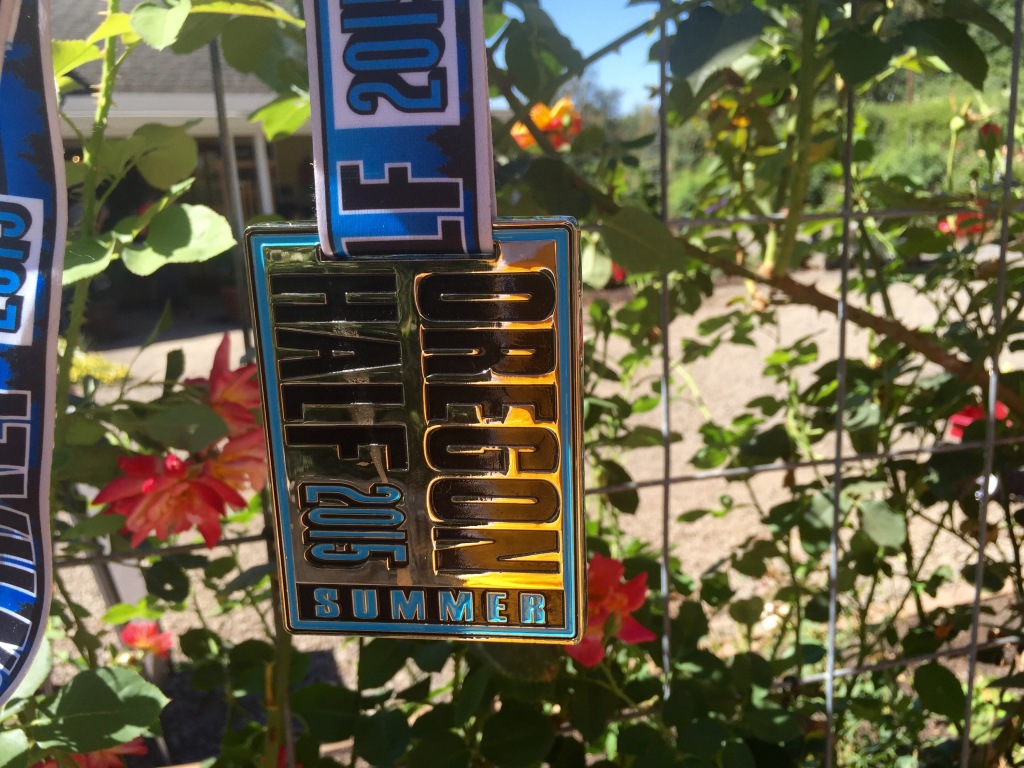 It’s such a beautiful place. The roses were nice! 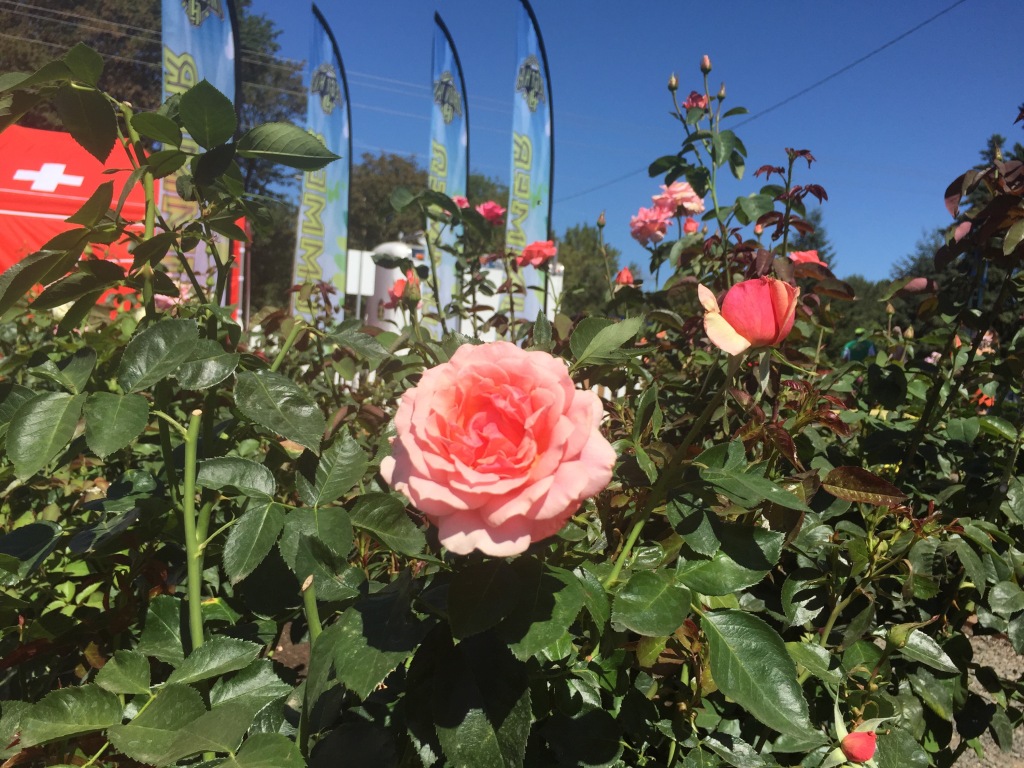 Happy to be finished. I’m holding my Simple Hydration Bottle. 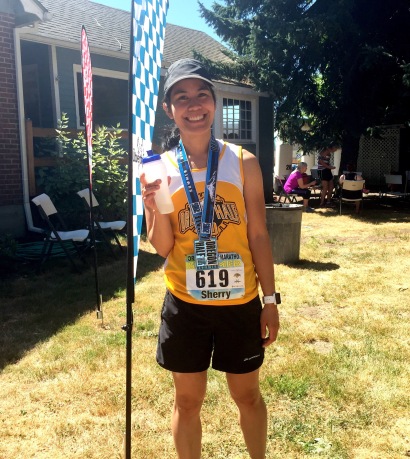 Post race – Oregon Half Pacers group pic. So grateful to be a part of this awesome group!

Also, instead of getting a shirt as part of the race swag like so many other races, we got shorts. It was a nice change.

I love how Uberthons has made the Oregon Half a series. There’s a Spring, Summer, Fall, and now a Winter race in January. For more info, check out there page HERE.