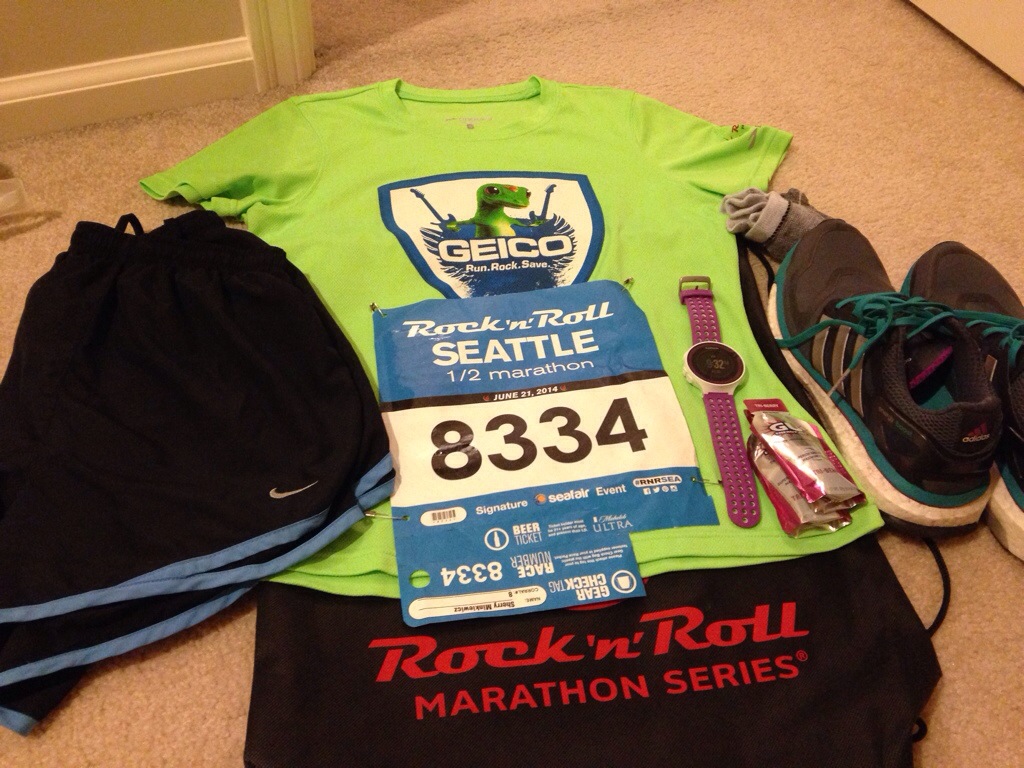 The Seattle Rock’n’Roll Half Marathon was another great race! I got most of my stuff I was going to wear and bring to the race together the night before and took a pic. I think the only thing I forgot to put in the pic was my FlipBelt, hat, and iphone. I wore the Geico shirt I won at the Portland Rock’n’Roll Expo because I wanted to get the free massage at the end :).  They have a booth at the Expo and you can win a shirt, water bottle, visor and bag. Then you can wear the shirt showing you’re on Team Geico and get a free massage at the end of the race at their booth.

This was an early race that started at 7 am. I woke up around 4 am and we left close to 5 am. We wanted to leave early to avoid traffic. I had a bad experience with traffic when I did the Hot Chocolate 5k in Seattle. Not this time. We took a different route and took highway 99 at the end and found free parking easily. It was nice to be relaxed and have time to go to the bathroom inside the Armory building close to the start. I had my blueberry bagel on the way and then had a Mamma Chia Strawberry Banana pouch when we got there.

It was great running the same race with my sister! We don’t get to run together often since she lives across the country, so this was nice to run a race while she was visiting. She’s the one who also got me into running races. The pic below is both of us in corral 8, waiting for the race to start. I had my Energy and Endurance formula right before the race, this stuff seems to really help and give me that extra boost. 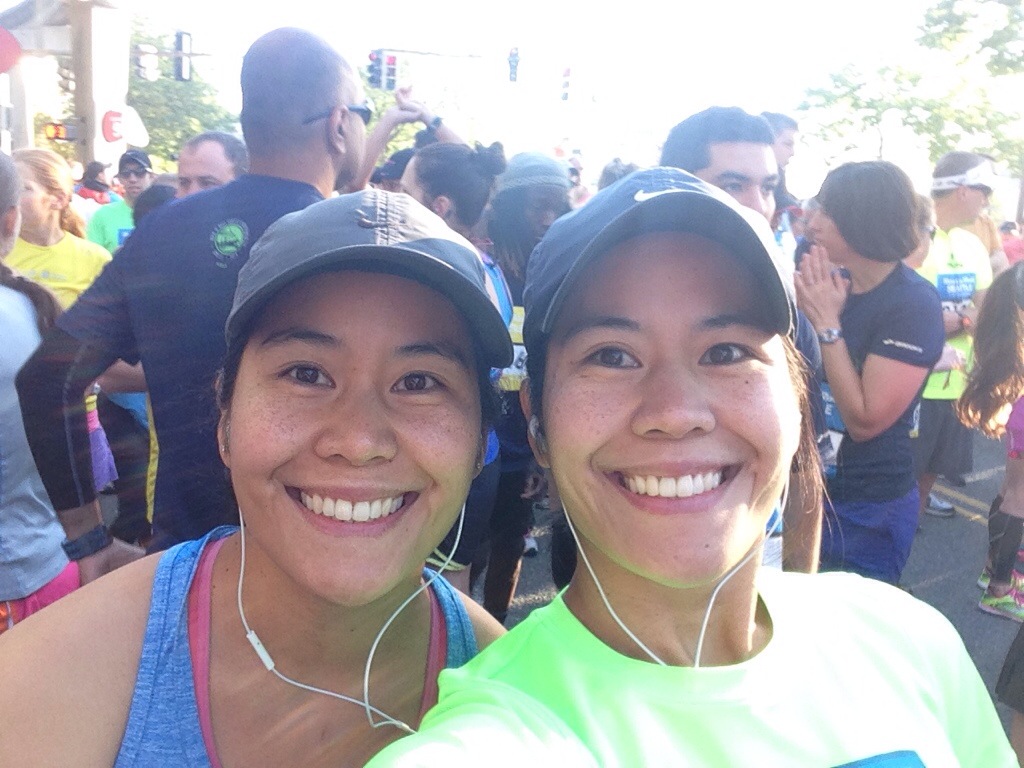 We started on Fifth Avenue and the pic below is of others waiting for the race to start.

Here are the pics I took while running the race: 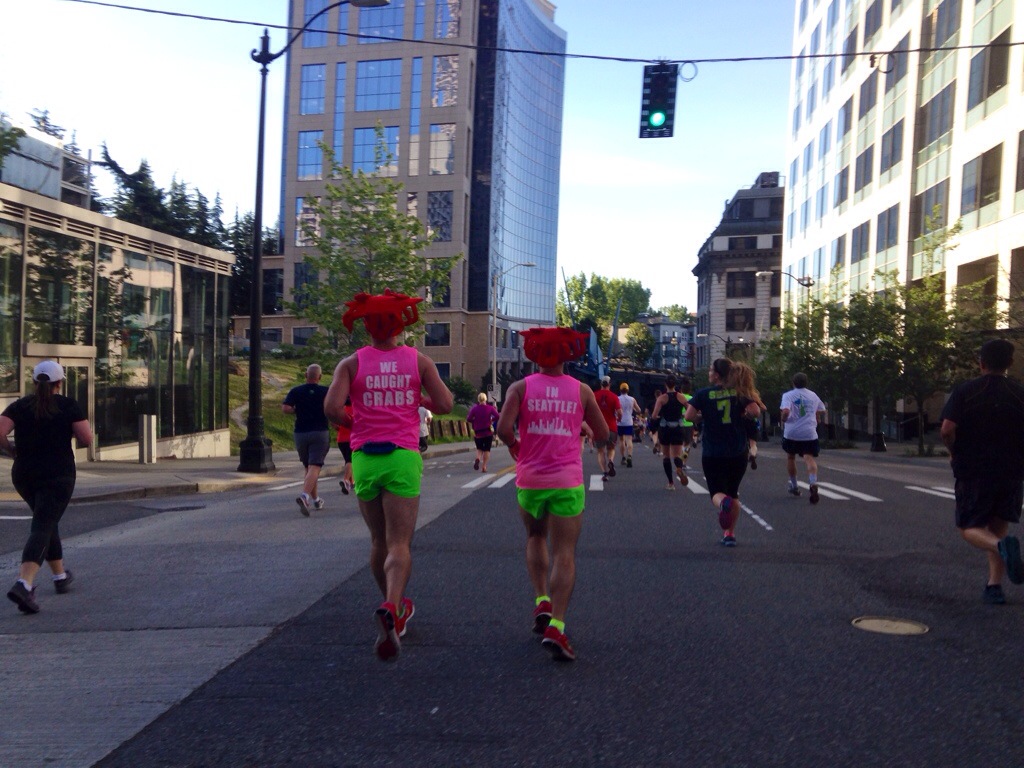 I didn’t see many people wearing costumes, but here are two guys. 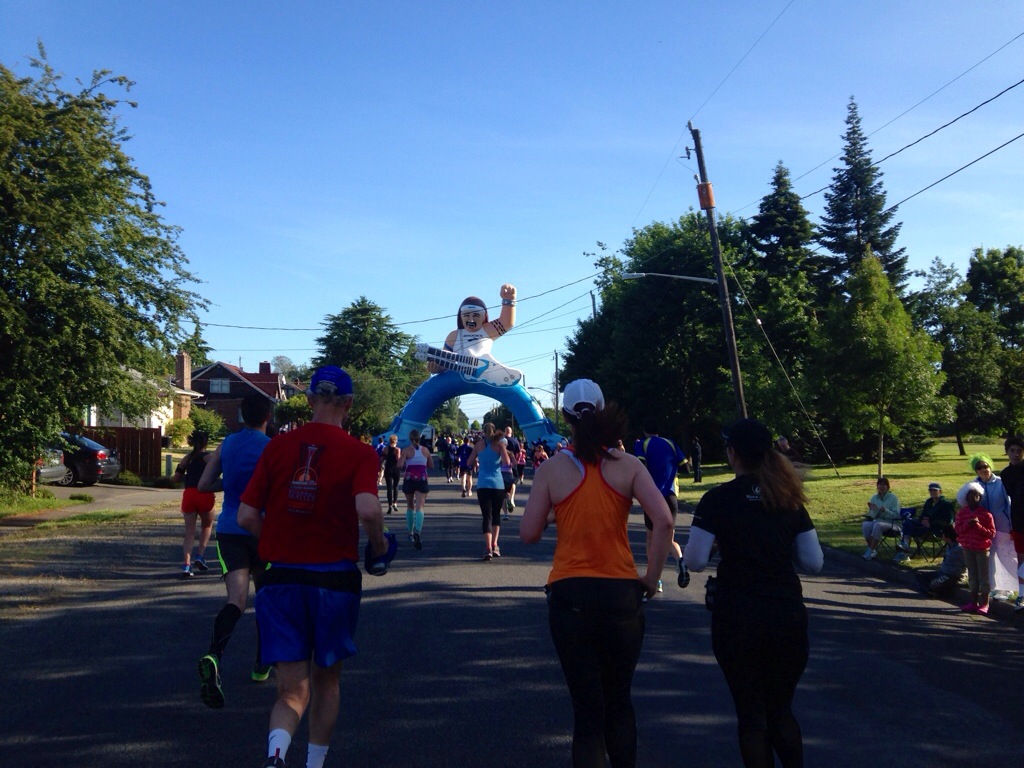 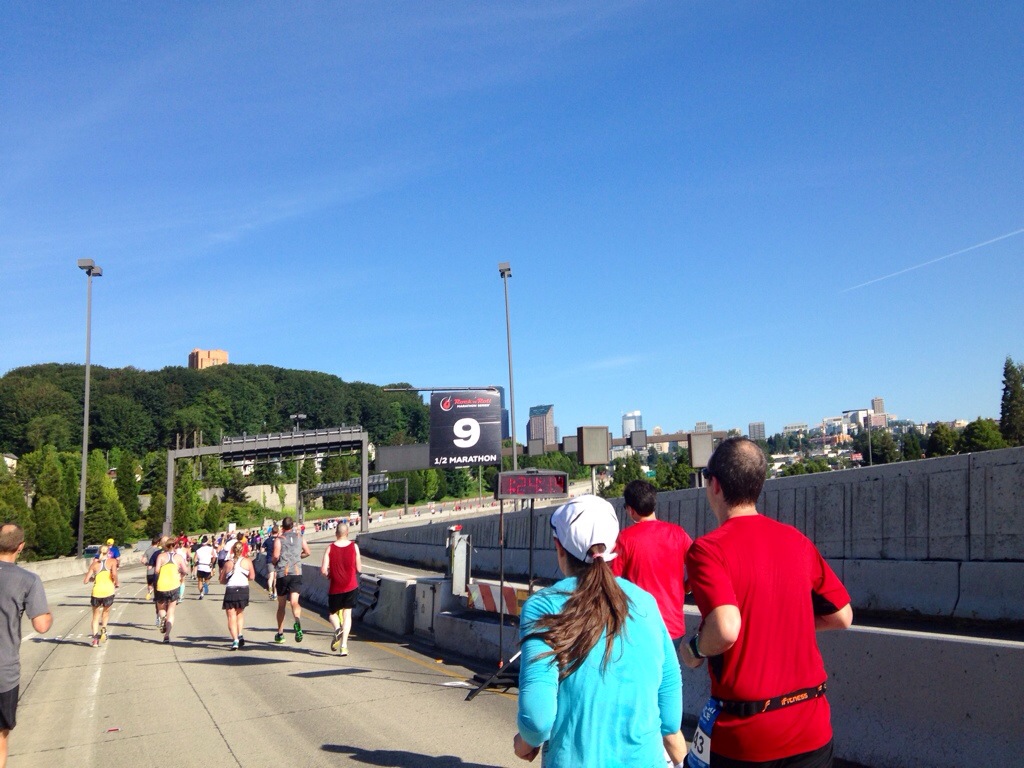 After going through the I-90 tunnel, I took a pic at mile 9. 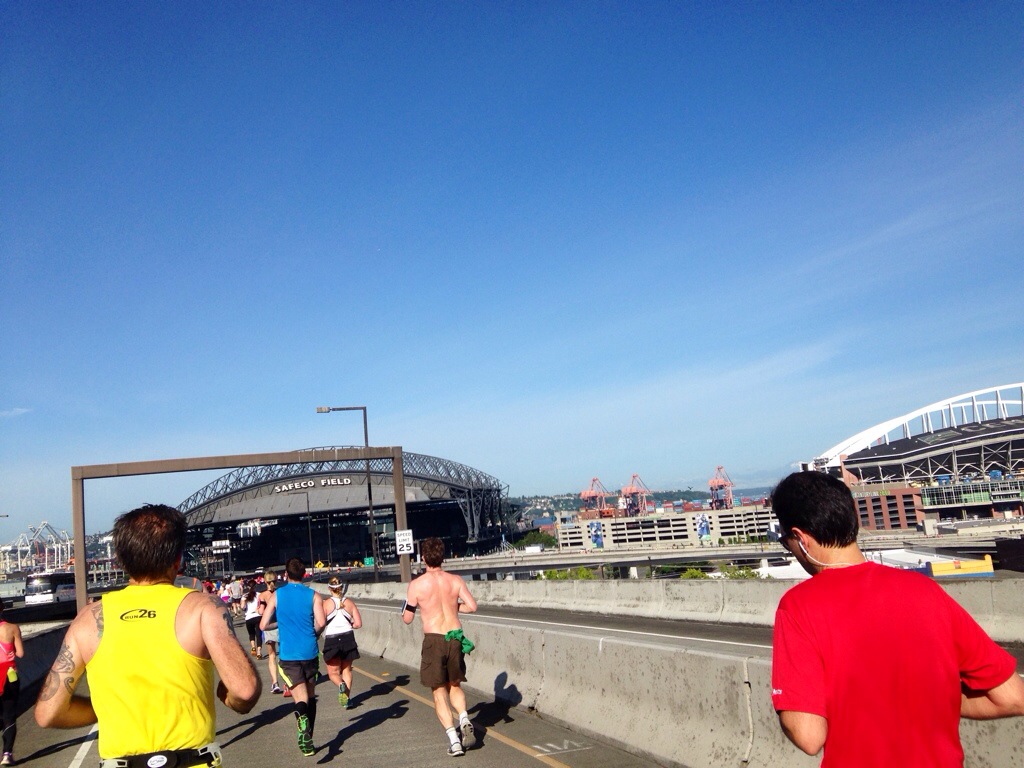 Here you can see Safeco Field and Century Link Stadium. 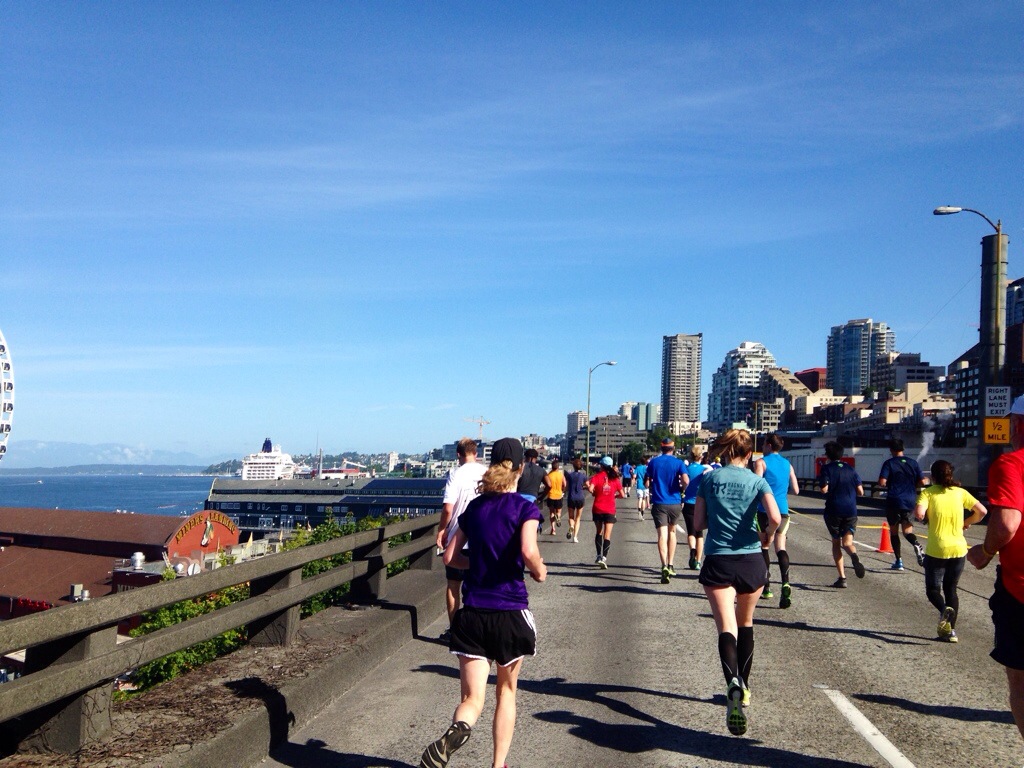 Here I think we’re on the Alaskan Viaduct and you can see a tiny bit of the Great Wheel on the left. 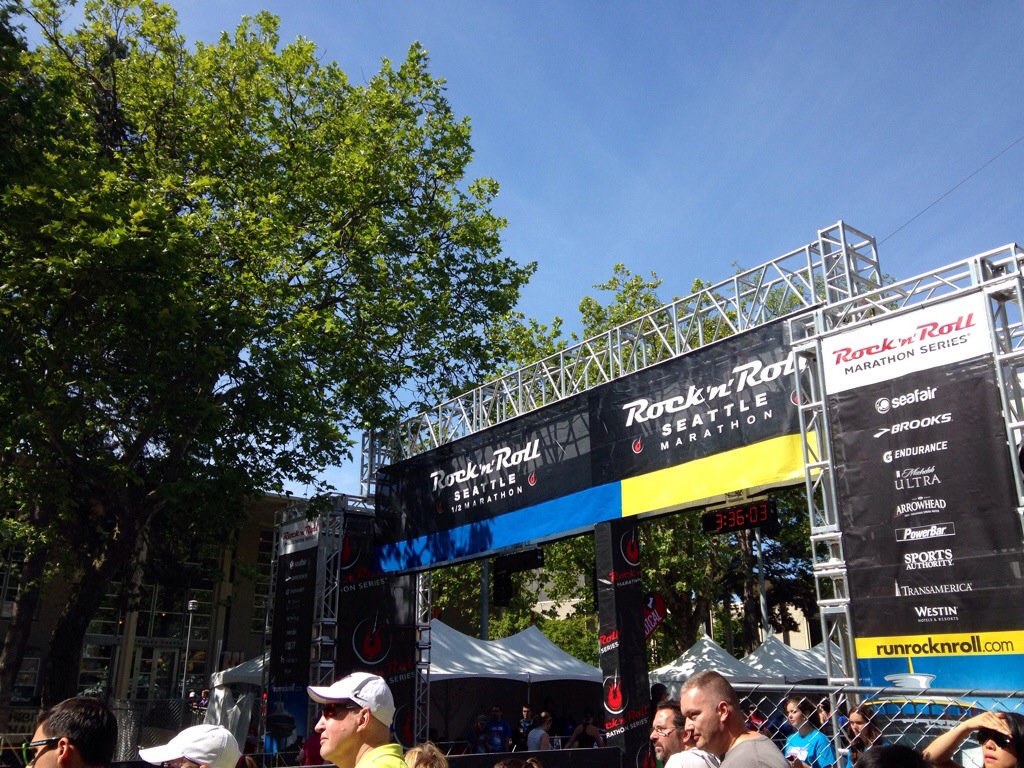 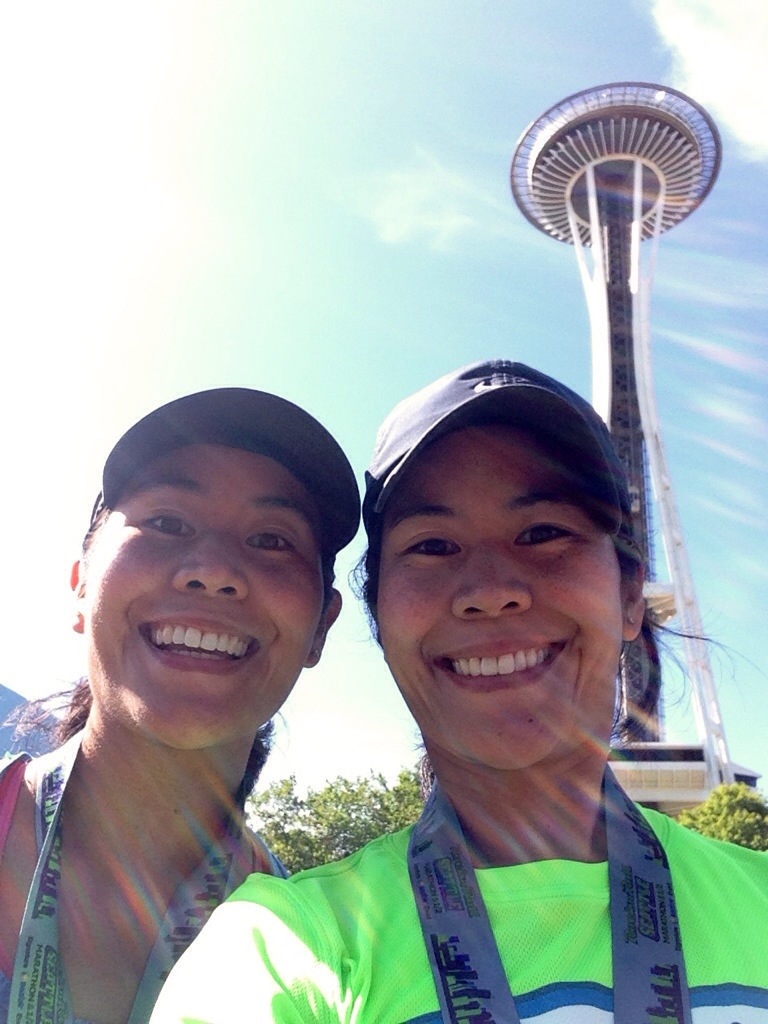 Me and my sis with the Space Needle in the back. We did it! 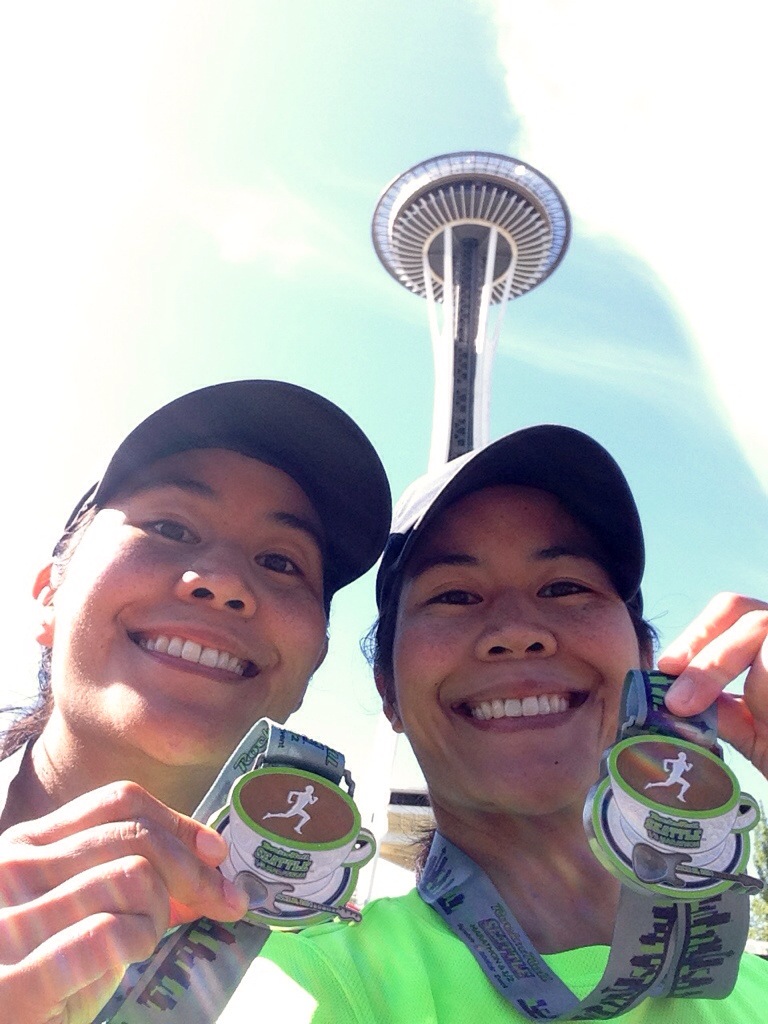 Below are pics of the finish area. There was water, chocolate milk, Gatorade, bagels, fruit cups, Power Bar protein bars, and trail mix given out. 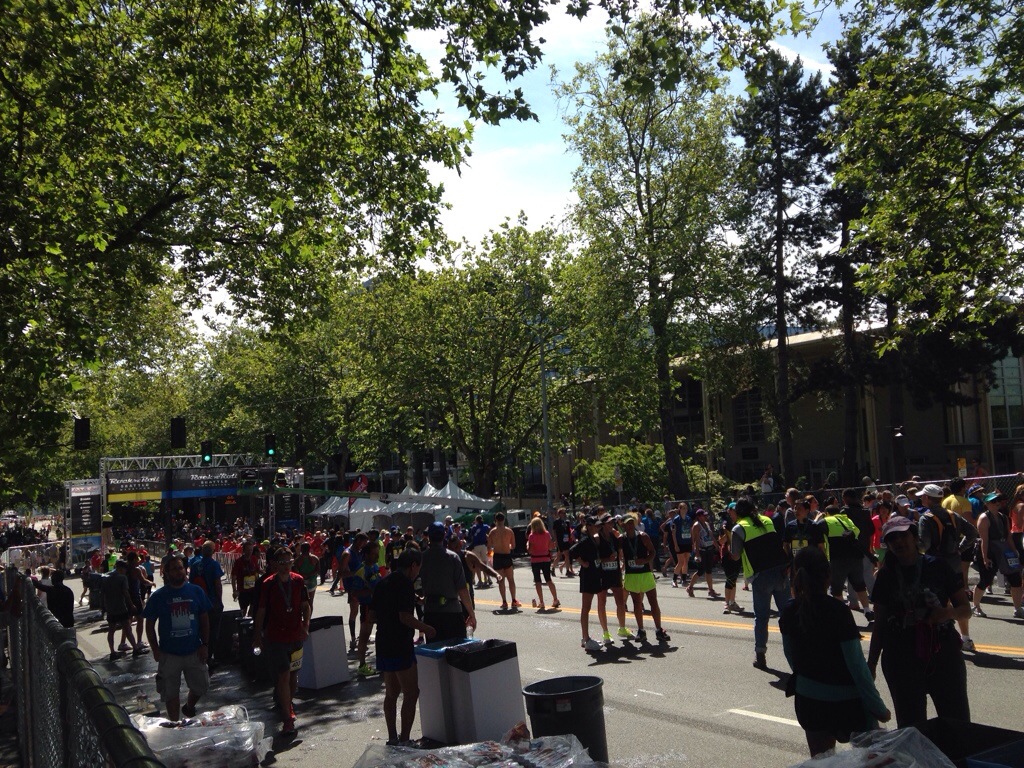 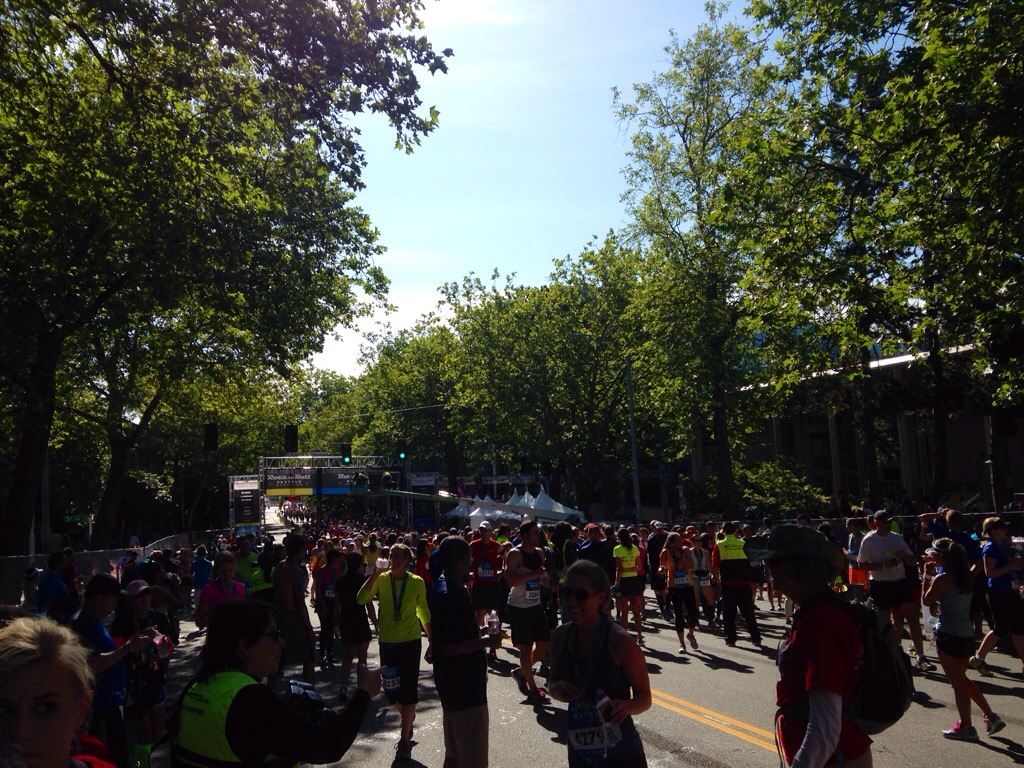 I did Gear Check for the first time and it was fast and an easy experience. I brought some Results and Recovery Formula for after the race and took that for my post race nutrition. It helps reduce muscle soreness. I also got my free massage for being on Team Geico. This was the first time getting my free massage and I was surprised that it lasted close to twenty minutes. It was nice! 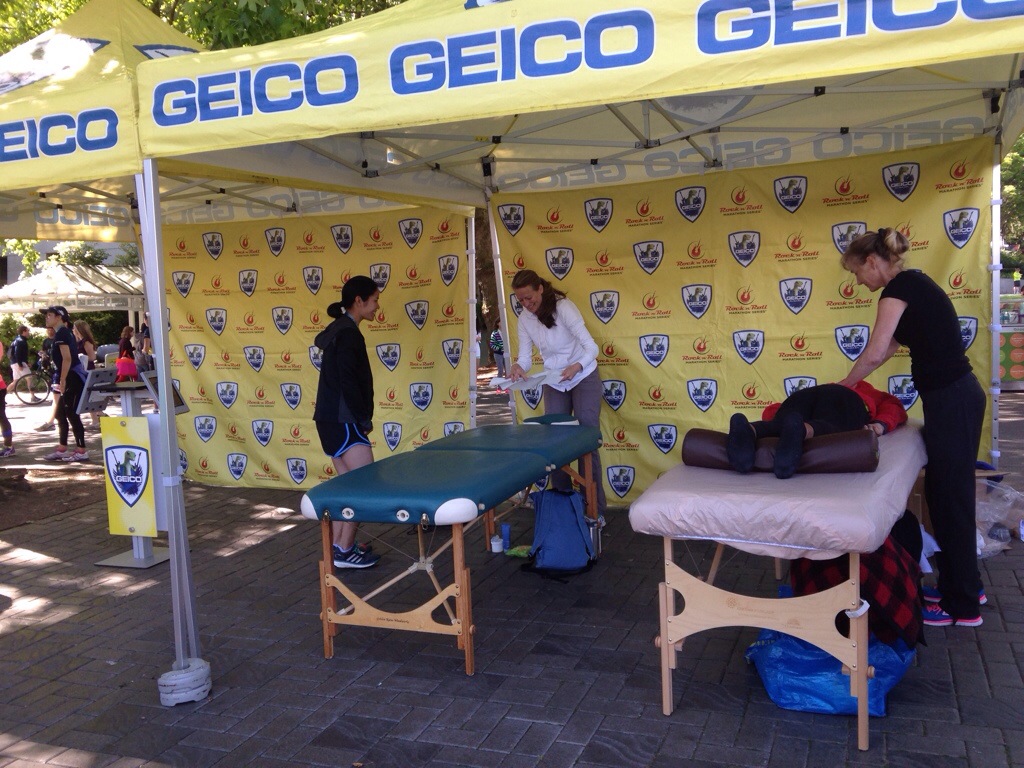 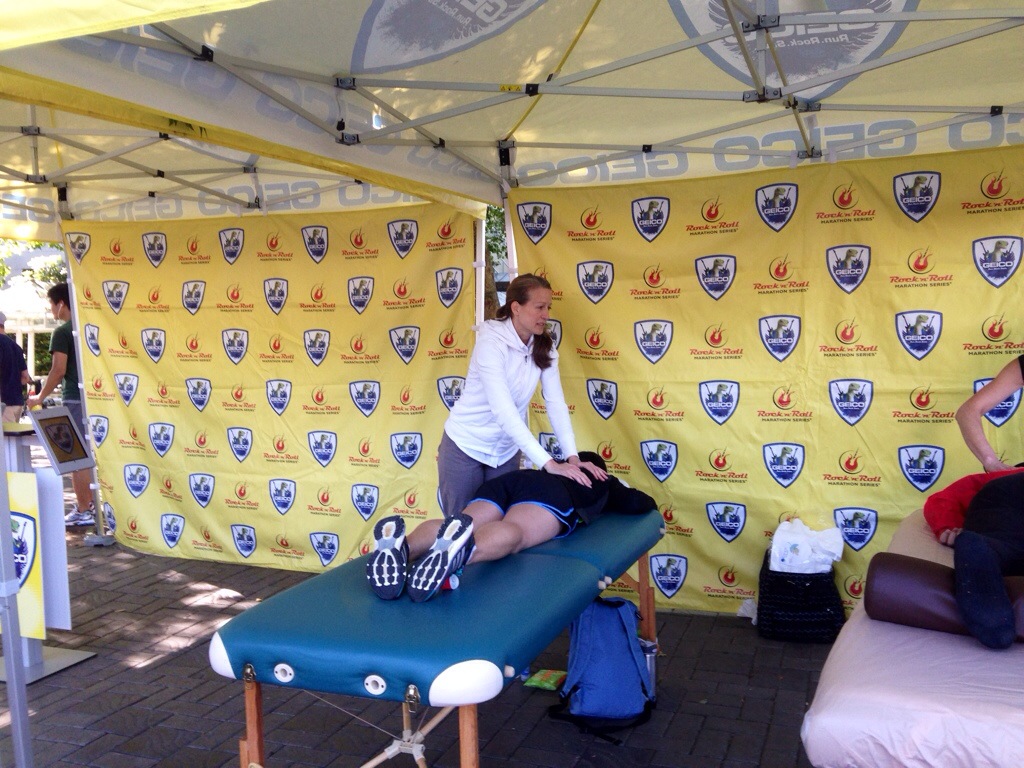 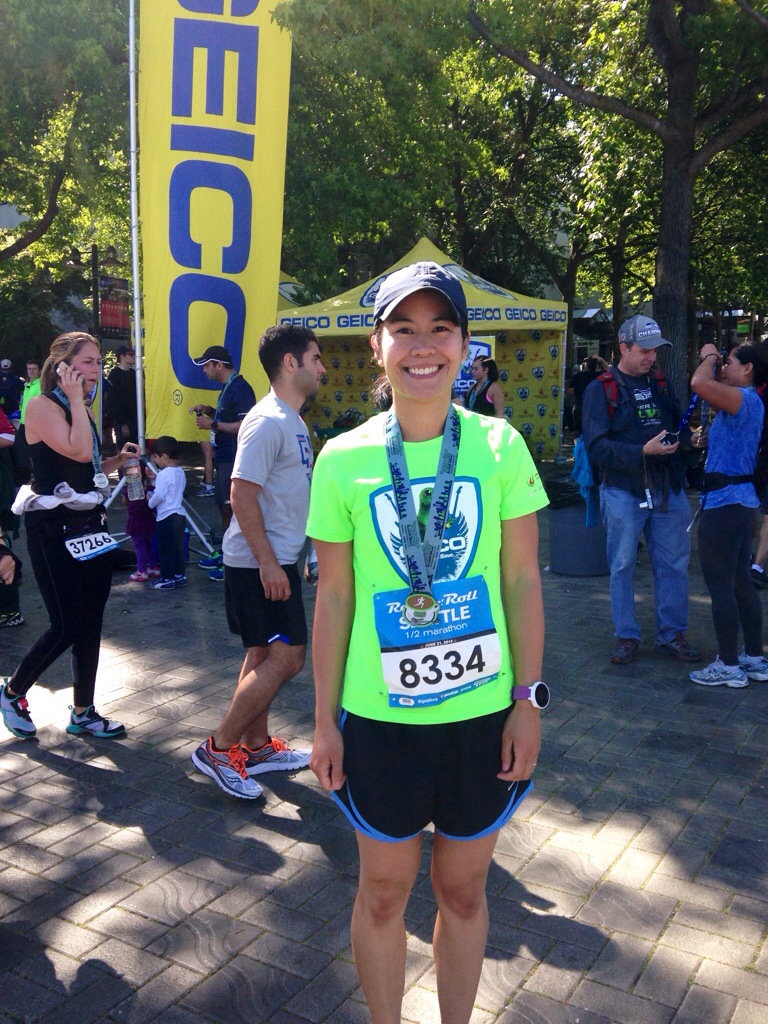 Overall, I thought this was an awesome and scenic race! I should have taken more pictures. There was a part where you could really see Mount Rainier in the background. Also, around mile 7, we were running along Lake Washington, and there was a sea of blue, military tributes and American flags to remember the honor and sacrifice of our service men and women. It was a really nice tribute.

The only thing I didn’t like was that it seemed like I ran longer than 13.1 miles. My Garmin said I ran 13.44 miles. I know weaving and not running the shortest possible tangents is hard and add some mileage but to get .34 extra seems a lot. My sister also got 13.44 miles on her Garmin. But it was still a fun race. The hill at the end was hard. But I’m still happy with my time. I was just 20 seconds away from a PR.

Also, Apolo Ohno was there! He ran the half marathon in 1:36:49, a personal best. It would have been cool to see him. I did see Doctor Dribble during the race. He runs the whole race with two basketballs. It’s amazing!

If you’re interested in running this awesome race, head on over here http://runrocknroll.competitor.com/seattle. 🙂

Here’s me and my sis by the fountain. I got cold after being sweaty and wet, that’s why I have my jacket on. 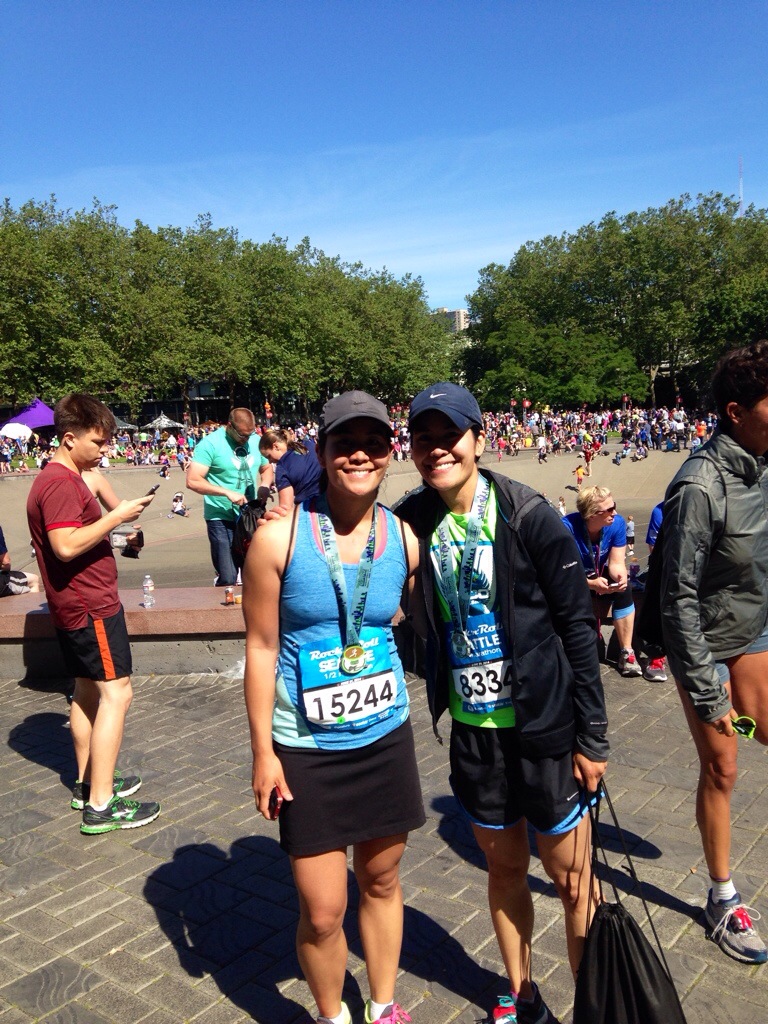 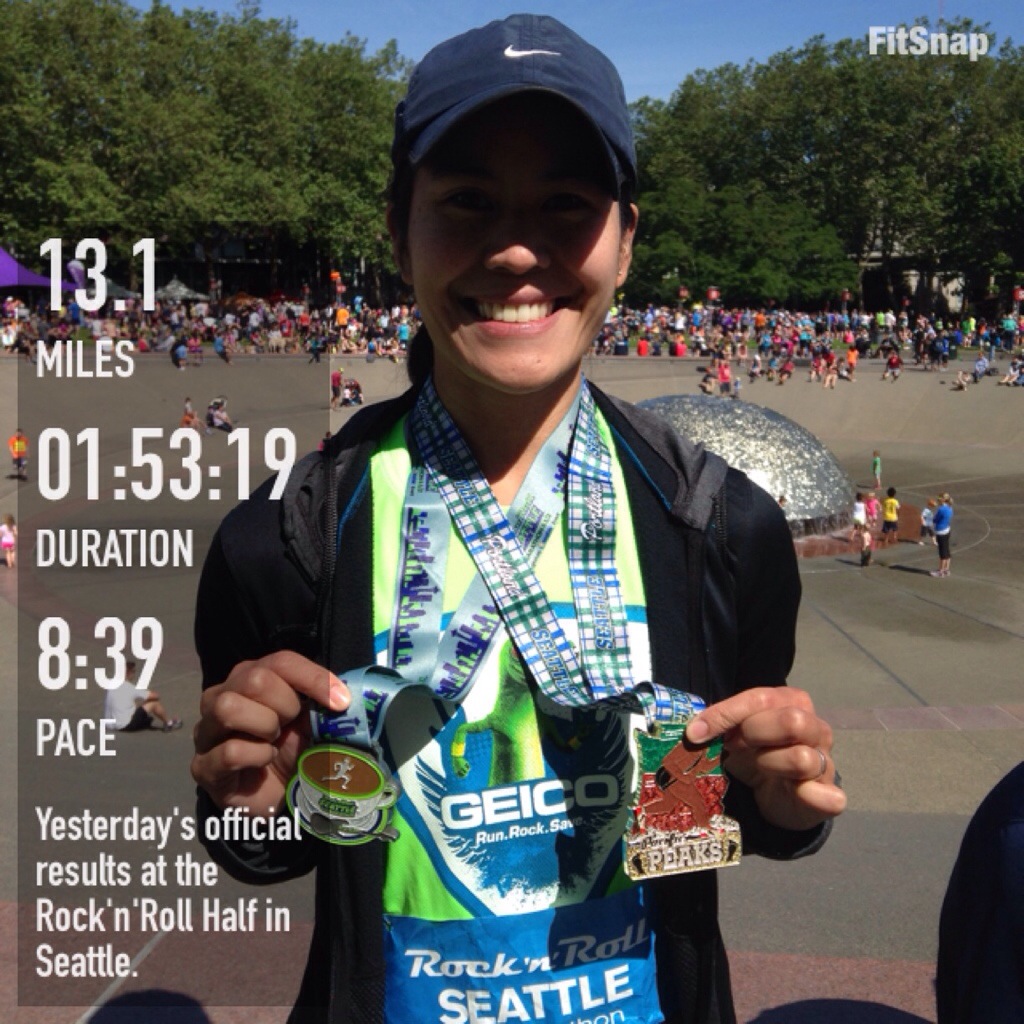 Here I am with my Pacific Peaks medal too.  I got it because I ran both the Portland Rock’n’Roll and the Seattle Rock’n’Roll races. 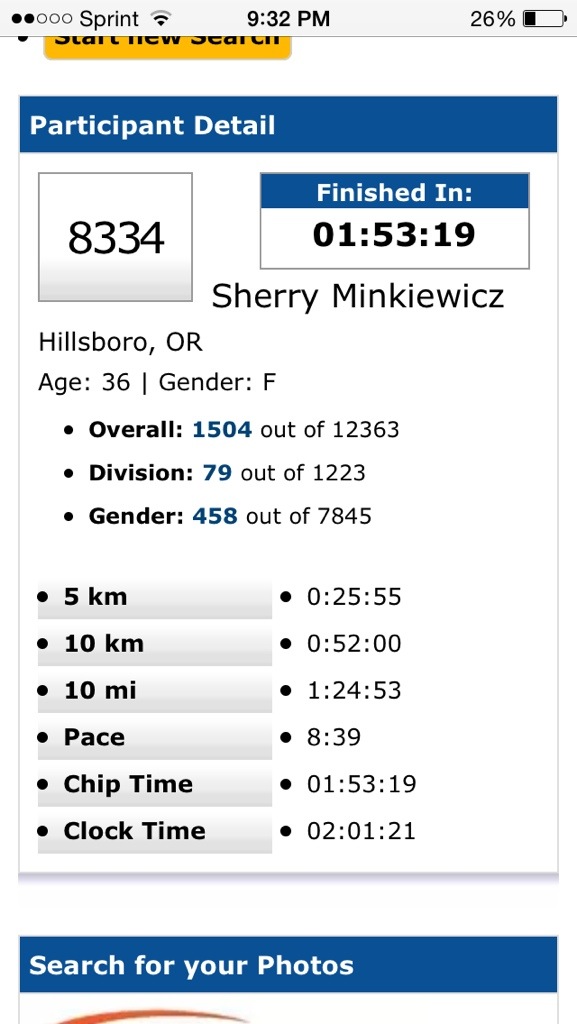 Also, here’s my splits from my Garmin: 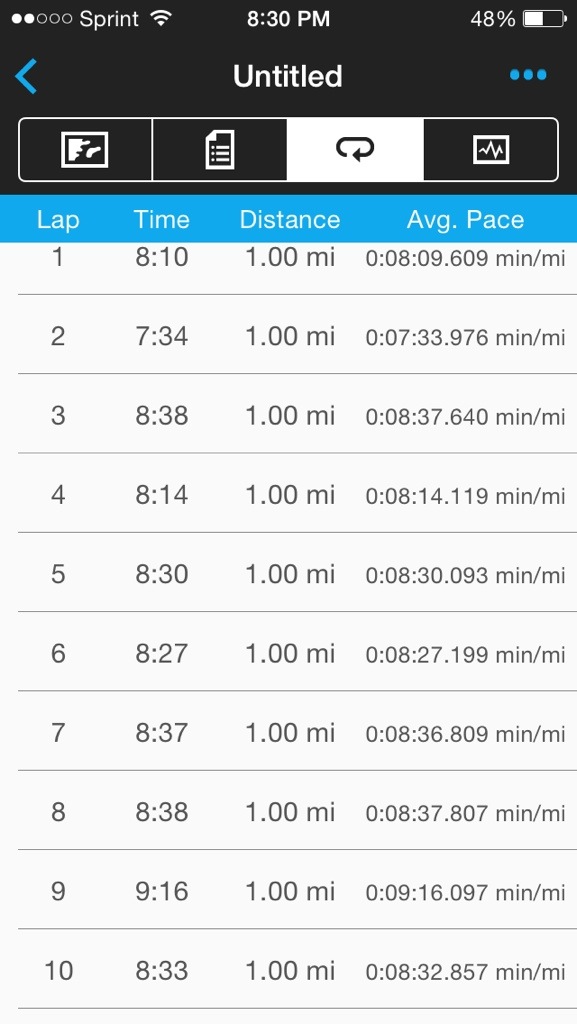 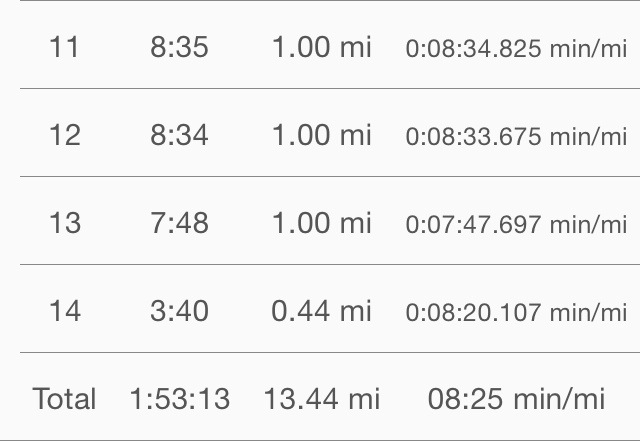 One thought on “Seattle Rock’n’Roll Half Marathon Recap”