Yesterday, I decided to try and make my own bib and medal holder. I was inspired after seeing how cool they are after going to the Mom’s Run This Town Spring Social Event. I recently joined this running group and it was nice to meet and connect with other runners. There might be a local chapter near you. Here’s a link to check, http://momsrunthistown.com/. But there was a raffle for these really nice bib and medal holders. They were from Strut Your Stuff Sign Company. Here’s an example:

If I had the money, I would’ve bought mine from them but they are on the pricey side,  so I decided to make my own.

I went to Target and browsed around and found a shelf on clearance for only $2.98. It was 70% off. Score! I could see it as my base piece. It’s a pretty heavy shelf and not bad quality. Then I went to the hook section and got my hooks to hang the medals. The ones I bought had two hooks in a package, so I bought two packs. Those were 3.99 each, kind of pricey and I could have looked around at other places for different types and got cheaper ones, but I didn’t. That’s all I got from Target.

When I got home, I decided to make the base a chalkboard as well. I had seen some medal holders that showed PR (Personal Record) times and thought that was a great idea. Also with the chalkboard, I could write different quotes and be able to change it up. I had bought the chalkboard decal before on a Living Social deal for like $8 a while back and just used a little of that for this project. I just measured and removed the backing to reveal the adhesive and wrapped the front of the shelf with the decal and I had my chalkboard. Then my hubby was gracious enough to drill the holes and attach the hooks as well as add a small nail for the clip I had already had for the bibs and voilà. 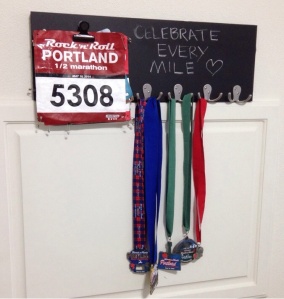 Before this, my medals were just in my bedroom laying on a table. Now I can display them proudly 🙂 as they hang in our workout room. I paid $11 for this since I had some of the stuff already like the chalkboard decal and clip for the bibs. Not bad, I think, compared to $45 not including shipping. What do you think? Do you use a medal display?

3 thoughts on “Medal and Bib Holder”